College Football Final: Everything You Need To Know From Week 9's Action 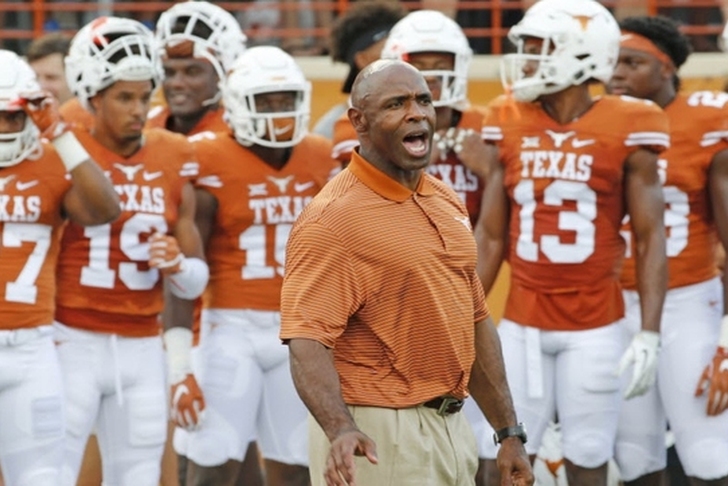 Even though there were no matchups between top 10 teams in Week 9, it proved to be one of the most exciting Saturdays of the weekend. Seven undefeated teams were tested in road games, and as you might expect, that led to a few upsets - and a few more near upsets as well. There were plenty of other notable happenings across the country, so here is everything you need to know from the weekend:

Texas shocks #8 Baylor
Baylor came into today's game ranked No. 8 in the country and undefeated, but really untested to this point in the season. Texas proved early that the Bears would get a big test in this one, scoring two quick touchdowns to take a 14-7 lead early in the first quarter. However, Baylor scored on their next possession, tying the game at 14-14 just five minutes into the game.

That touchdown didn't take any momentum away from Texas. After getting a safety, star running back D'Onta Foreman got his second rushing touchdown of the day to give the Longhorns a 23-14 lead.

It looked like that would be the score going into halftime, but in typical Baylor fashion, the Bears drove right down the field and scored wtih 19 seconds left in the second quarter, making it a 23-21 Texas lead at the break. Baylor picked up on that momentum to score 13 of the next 16 points in the game, taking a 34-26 lead to regain control.

Luckily for the Longhorns, there was still eight minutes on the clock. It took them six plays to go right back down the field and score another touchdown on a seven-yard touchdown pass from Shane Buechele to Andrew Beck. However, Tyrone Swoopes was stonewalled at the goal line on Texas' two-point conversion attempt, preserving Baylor's 34-32 lead.

Baylor was unable to do extend the lead once they got the ball back, giving Texas a chance to drive down the field to set up the game-winning field goal. The Longhorns did get that chance, and Trent Domingue delivered, giving Texas the win.

The FG that won the game for #Texas! #BAYvsTEX pic.twitter.com/q7MXa955UN

Oklahoma State hands #10 West Virginia first loss
The West Virginia Mountaineers had emerged as one of the favorites to win the Big 12 thanks to a perfect 6-0 start to the season that had them ranked #10 in the country, but all of that came crashing down in Stillwater on Saturday. The Oklahoma State Cowboys took control of the game in the second quarter and never gave it back, holding on for the 37-20 upset win over the Mountaineers. It marks the fifth time in six years at Oklahoma State has upset a top-10 team.

Each team started with a field goal on the opening drive, but West Virginia looked like they might start separating themselves when a 19-yard touchdown pass from Skyler Howard to Shelton Gibson game them a 10-6 lead. However, Oklahoma State closed the half by scoring two straight touchdowns to take a 20-10 lead into the break, capped by this three-yard pass from Mason Rudolph to Jalen McCleskey:

WVU looked like they were on their way to cutting into the lead late in the third quarter, but Ramon Richards intercepted a tipped pass and returned it to the nine-yard line:

Rudolph then rushed it into the end zone to end the drive with a touchdown, giving the Cowboys a 27-10 lead. West Virginia responded with 10 unanswered points to make it a one-possession game, but Oklahoma State scored 10 points of their own to put the game away and preserve the victory.

Both teams are now 3-1 in Big 12 play. With WVU and Baylor's losses, the Big 12 has no undefeated teams, likely leaving the conference out of the College Football Playoff.

#11 Wisconsin knocks #7 Nebraska from ranks of the unbeaten
The Nebraska Cornhuskers were 7-0 coming into this game and ranked No. 7 in the country, but many around the country felt they were largely untested. The Wisconsin Badgers provided that test and ultimately handed the Cornhuskers their first loss of the season with a 23-17 overtime win.

After a rather nondescript first half in which both teams traded touchdowns, Wisconsin took what appeared to be a convincing 17-7 lead in the third quarter when Alex Hornibrook hit Robert Wheelwright with a nine-yard touchdown pass.

However, the Huskers were far from done. spurred on by two four-quarter interceptions from safety Nathan Gerry, Nebraska scored 10 unanswered points in the fourth quarter to tie the game 17-17, and eventually send it into overtime after Wisconsin missed a field goal with less than two minutes remaining.

Wisconsin got the ball first to start the extra session, and promptly scored on a 11-yard touchdown run from Dare Ogunbowale.

Then, their kicking struggles reared their ugly head again, as they missed the extra point, leaving the door open for a Huskers win - if they could just score and get the extra point. That is not what happened. Nebraska managed just two yards on their possession, as their desperation pass into end zone on fourth down fell incomplete, preserving the victory for Wisconsin.

#5 Louisville survives Virginia
This game was very off the radar coming into the weekend, but it quickly became a game everyone was paying attention to after Virginia took a 17-7 lead early in the third quarter. With their backs against the wall, the Cardinals reeled off 17 straight points to take a 24-17 lead.

It seemed like they had regained control of the game, but then UVA's Doni Dowling caught a four-year pass from Kurt Benkert for a touchdown. Instead of going for the extra point, head coach Bronco Mendenhall decided to go for two, giving Virginia a shocking 25-24 lead with less than two minutes to play:

Anyone who counted Louisville out after that must have forgotten that they have Lamar Jackson under center. He quickly raced Louisville back down the field into position for a game-winning field goal attempt - only instead of settling for a field goal, Jackson delivered his Heisman moment by hitting Jaylen Smith for the game-winning 29-yard touchdown.

Think Jackson struggled in the game? Well, not exactly. He did turn the ball over twice, but he finished with 361 passing yards and four touchdowns with 90 rushing yards, keeping him as the Heisman frontrunner.

Other upsets
A few other ranked teams lost on Saturday, including another unbeaten team in Boise State:

Cruise control
Here are the ranked teams that had no trouble picking up wins on Saturday:

Next weekend
Here are the biggest games we have to look forward to next weekend, and what an amazing slate of games it is: