College Football Final: Everything You Need To Know From Week 4's Action 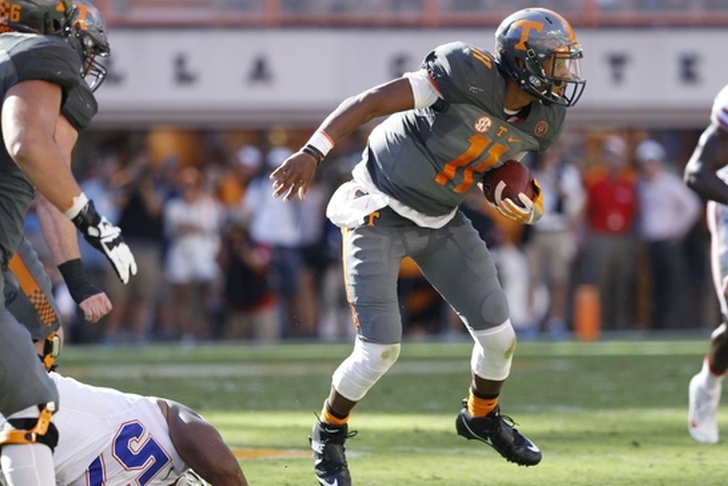 The first college football weekend of fall didn't disappoint. Even though several of the country's top teams either had bye weeks or were playing lower-ranked opponents, there were plenty of intriguing, close, exciting and impactful games. Here is everything you need to know from Saturday's games:

CRAZY ENDINGS!!
The craziest sequence of the day went to Auburn and LSU. After the Tigers converted a 4th down with one second left, they appeared to get the snap off and score the game-winning touchdown as time expired. However, the play was reviewed.

That was a BRUTAL loss for LSU, and a big win for LSU. It also might be the nail in the coffin for Les Miles' tenure as LSU's head coach.

Up next, there was Stanford's narrow win over UCLA. The Cardinal were down 13-9, yet took the lead for good with this touchdown from J.J. Arcega-Whiteside:

The touchdown that won the game for #Stanford! #STANvsUCLA pic.twitter.com/QQrHGqu9qZ

The final score ended up being 22-13 after Stanford forced a fumble, recovered it and ran it back for a touchdown on the final play of the game when UCLA was going for the Hail Mary.

Finally, we have North Carolina and Pitt in a pivotal ACC Coastal matchup. The lead went back and forth all night, but UNC's Bug Howard reeled in the game-winning touchdown with just two seconds left, giving the Heels the 37-36 win.

Tennessee's HUGE second-half comeback
The Vols had lost 11 games in a row to Florida, and the Gators were well on their way to extending that streak when they took a 21-0 lead in the second quarter. However, the Vols were not done, scoring 38 unanswered points to win in convincing fashion.

The 38-28 win puts Tennessee in the driver's seat in the SEC East while also keeping their undefeated start in tact. It hasn't been pretty this season for the Vols, but this game could serve as the point where they really start playing up to their potential - and compete for the playoff spot.

Wisconsin makes a statement
The only top-11 matchup of the week turned out to be a rather one-sided affair, as the #11 Wisconsin Badgers and absolutely blew out the #8 Michigan State Spartans, winning 30-6. After an early Michigan State field goal, Wisconsin reeled off two long touchdown drives that resulted in one-yard touchdowns as they built a 13-3 lead, but the Spartans would add another field goal before the half.

Then, with Michigan State trying to come back, running back L.J. Scott fumbled and Badgers linebacker Leo Musso picked up the fumble and ran it back 66 yards for the score.

That play turned the game around and but the Badgers firmly in control as they cruised to the easy victory. The win cements the Badgers as a top 10 team and the favorite in the Big Ten West.

Notre Dame continues downward spiral
The wheels are quickly falling off of Notre Dame's season, as their downward spiral continued on Saturday with a hugely disappointing 38-35 loss to Duke. The Irish were looking to rebound after being dismantled by Michigan State last weekend, but instead lost at home to a Blue Devils team that was coming off losses to Wake Forest and Northwestern. Notre Dame is now just 1-3 on the season, and their defense can't stop anyone. Is it time to wonder if the Irish will even make a bowl game?

Several top teams on cruise control
Aside from those marquee matchups, a bunch of top teams had easy times with their opponents. Here are those scores:

Next weekend is going to be awesome
College football is the gift that keeps on giving. Next weekend's slate is due to be the biggest of the season: