College Football Final: Everything You Need To Know From Week 11's Action 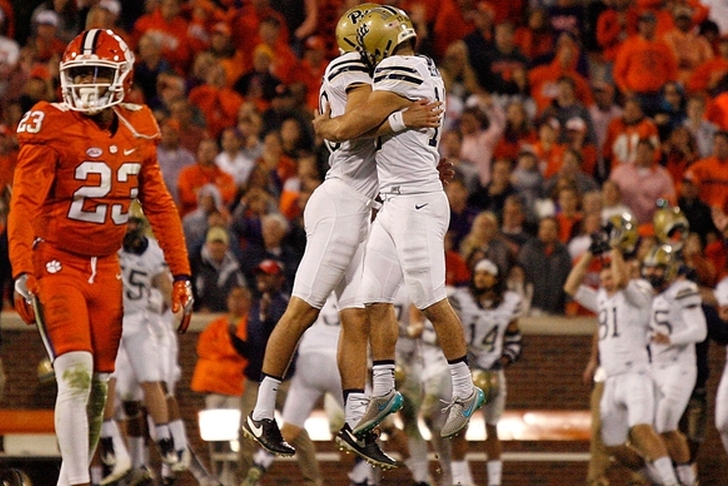 Every year, there is that one wacky weekend in November when a bunch of ranked teams lose at the same time, creating chaos in the College Football Playoff rankings. Today was that day, as FIVE teams in playoff contention were defeated. There were plenty of other notable happenings across the country, so here is everything you need to know from the weekend:

#2 Clemson stunned by Pitt
Clemson had survived several close calls this season, but could not survive this one. It was their first home loss to an unranked opponent since 2008, and snapped their 46-game winning streak over unranked teams. The loss also ended Clemson's 21-game home winning streak, which was the longest in the country.

Both sides went back and forth in a wild first half, but a missed extra point field goal from Blewitt gave Clemson a 28-27 lead going into the halftime break.

The second half was no different, but a one-yard touchdown run by Wayne Gallman at the end of the third quarter pushed Clemson to a 42-34 advantage. Both defenses stepped up after that, yet it looked like Pitt looked ready to tie that game when James Conner ran for a 20-yard touchdown with just over five minutes to play. However, Pitt could not make the two-point conversion, and it looked like the Tigers were going to escape again.

But the Panthers would get one more chance. After stopping Clemson on a 4th & 1 attempt in the final two minutes, Pitt drove down the field to set Blewitt up for his game-winning field goal attempt:

Pitt used a huge game from quarterback Nathan Peterson to keep pace with Clemson offensively. He threw for 308 yards and five touchdowns with no interceptions, while Conner added 132 yards and another touchdown on the ground.

Deshaun Watson had another great performance for Clemson, going 52/70 passing for an ACC-record 580 yards and three touchdowns. However, the difference in the game was Watson's three interceptions.

#3 Michigan falls at Iowa
The #3 Michigan Wolverines were facing their first real road test of the season against the Iowa Hawkeyes on Saturday, and Michigan didn't pass the test. In a defensive slugfest, Iowa used a game-winning field goal as time expired to grab a 14-13 win over the Wolverines.

At the start, Michigan looked like they were going to be in control of the game as a short touchdown run from Ty Isaac gave them a 10-0 lead in the second quarter. The defense held firm after that, but a safety on Michigan's next possession really turned this game around. Suddenly with some momentum, Iowa went down the field and scored on a three-yard touchdown pass from C.J. Beathard to running back Akrum Wadley. After the two-point conversion failed, Michigan took a 10-8 lead into the half.

The rest of the game was a battle of field goals. Iowa took the lead at the start of the third quarter with a 25-yarder from Keith Duncan. They held that lead for a full 15 minutes, then Michigan took the lead back on a 51-yard field goal from Kevin Allen.

A late interception looked like it was going to seal the game for the Wolverines, but the Hawkeyes got the ball back with less than two minutes left...and managed to get in position for this:

#20 USC dominates #4 Washington
The #4 Washington Huskies were looking to prove that their 9-0 start was no fluke. Unfortunately for them, they came up flat in their biggest test of the season, losing 26-13 at home to the #20 USC Trojans.

USC wasn't able to take over until the 2nd quarter, when star quarterback Sam Darnold found Darreus Rodgers in the end zone for the eight-yard touchdown. That was followed by this four-yard touchdown run from Ronald Jones II to give the Trojans a 17-6 advantage.

Washington appeared to re-gain their footing in the third quarter when Jake Browning hit John Ross for a 70-yard touchdown, but USC and Darnold responded with another eight-yard touchdown pass, this one to tight end Daniel Imatorbhebhe.

USC's defense held firm from that point on, adding a safety to give them the 26-13 win.

Ole Miss rallies to beat #8 Texas A&M
The Ole Miss Rebels have had a less-than-spectacular season to this point, but injuries forced them to turn to true freshman quarterback Shea Patterson - and in his first start, he delivered a stunning 29-28 upset over the #8 Texas A&M Aggies in College Station.

The Aggies were also without their starting quarterback, Trevor Knight, but it didn't seem to affect them whole lot at the beginning of the game. Quarterback Jake Hubenak and running back Keith Ford powered the Aggies to a 21-6 lead at halftime, and that was the lead they held into the fourth quarter - when all hell broke loose.

Not to be outdone, Patterson went down the field in less than a minute and a half, finding Van Johnson for a 32-yard touchdown.

After that, Ole Miss' defense stepped up, and a 39-yard field goal from Gary Wunderlich with less than a minute left won the game for the Rebels, capping a 23-point 4th-quarter and a 15-point comeback.

Georgia's defense dominates in win over #9 Auburn
The Georgia Bulldogs have finally gotten the signature win of the Kirby Smart era. Led by their defense, Georgia's offense managed to do just enough to get a 13-7 victory over the #9 Auburn Tigers.

In the first half of this game, Auburn was in total control. A 15-play drive at the end of the first quarter set up a three-yard touchdown run from Kerryon Johnson, giving the Tigers a 7-0. That was the way it would stay for the rest of the first half with neither offense being able to really gain any momentum.

The second half was a different story. On Auburn's first drive, quarterback Sean White threw an interception to Maurice Smith, who returned it 34 yards for a touchdown to tie the game.

Upset brewing in Athens? Georgia is tied 7-7 with #9 Auburn going into the 4th quarter because of this pick-six! #UpsetAlert #AUBvsUGA pic.twitter.com/moaejoi0jy

Auburn's offense was completely stagnant after that. They went three-and-out on each of their next five drives, while Georgia managed to get two field goals in the fourth quarter to take a 13-7 advantage. Auburn got the ball back with two and a half minutes left, but again, failed to pick up a single first down for the sixth straight drive.

In second half, Georgia's defense held Auburn to just 32 total yards, including just 164 yards and a measly 37 passing yards for the game.

Other upsets
Here are the other ranked teams that fell victim to the upset bug on this weekend:

Cruise control
Here are the ranked teams that had no trouble picking up wins:

Next week
Here are the biggest games we have to look forward to next weekend, and what an amazing slate of games it is: