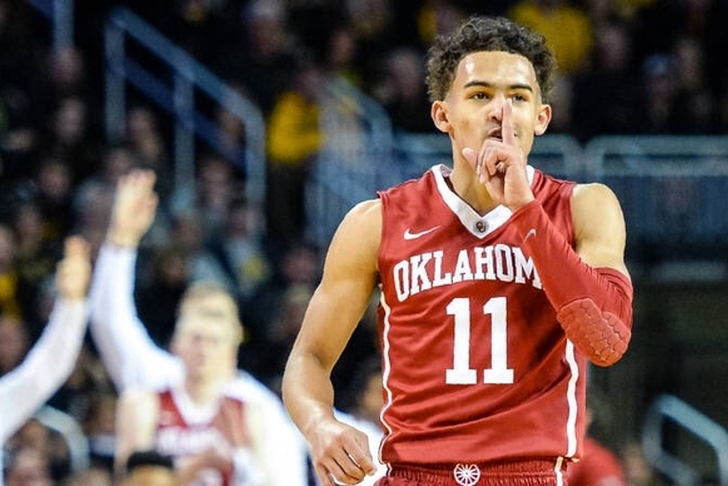 Following a really slow week of college basketball, the weekend brought about plenty of shocking upsets and near upsets.

The most impressive team of the week was Oklahoma as another incredible performance from Trae Young (29 pts, 10 asts) led them to a dominant win over Wichita State on the road, solidifying the Sooners as one of the best teams in the entire country. OU now has victories over Oregon, USC, and the Shockers - all of which have come away from Norman. With Young emerging as the best player in the country, this team has surged into the top five of these rankings.

Meanwhile, Seton Hall, Notre Dame, Florida State, and Florida all fell to unranked opponents with the latter three falling out of these rankings entirely - and several more narrowly avoided that fate. Kansas needed a last-second three-pointer from Svi Mykhailiuk to beat Nebraska, Gonzaga needed overtime to get past North Dakota, and Xavier overcame a 22-point deficit to beat East Tennessee State.

How will all of that craziness shake up the rankings this week? Here are my latest Top 25 Power Rankings:

25) Tennessee Volunteers (7-2)
LW: NR
Tennessee jumps into these rankings for the first time despite their 78-73 loss to UNC because of the way they played, controlling most of the game before falling apart late. Considering that their only losses have been to Villanova and the Tar Heels, the Vols look like a very solid team.

24) Creighton Bluejays (8-2)
LW: NR
Creighton is another team with two "good losses" to Baylor and Gonzaga and is on a three-game win streak thanks to one of the country's best offenses. They'll be tested again tonight against a good UT-Arlington team that's looking for a signature non-conference win.

23) Arkansas Razorbacks (8-2)
LW: NR
The Razorbacks are the only team in the nation with a top 10 RPI and a top 10 non-conference strength of schedule, earning them a spot in these rankings with all of the teams that lost this weekend. A 16-point win over Minnesota last weekend showed just how dominant this team can be.

22) Louisville Cardinals (8-2)
LW: NR
After losing back-to-back games to Purdue and Seton Hall, Louisville has won four straight games against lesser competition. They appear to have found their stride ahead of their showdown with Kentucky on Dec. 29 before the start of conference play.

21) Texas Tech Red Raiders (9-1)
LW: 22
Texas Tech's best wins have come over Northwestern and Nevada, two teams that aren't as good as they were thought to be when they faced the Red Raiders. Though they're taking care of business, we won't really know how good this team is until they start conference play - Texas Tech faces Baylor, Kansas, Oklahoma, and West Virginia (all teams in these rankings) within their first five Big 12 games.

20) Baylor Bears (9-2)
LW: 20
Speaking of Baylor, they routed Savannah State in their last outing thanks to a 31-point, 20-rebound performance from Jo Lual-Acuil Jr.

19) Seton Hall Pirates (9-2)
LW: 10
How can Seton Hall beat teams like Texas Tech and Louisville with ease, then lose to a team like Rutgers? Crazy things can happen in rivalry games, but giving up a double-digit lead down the stretch to the Scarlet Knights is inexcusable. Still, the Pirates have enough quality wins to keep them in the top 20.

18) Virginia Cavaliers (9-1)
LW: 19
UVA got back to their winning ways with a 20-point win over Davidson. Two easy games against Savannah State and Hampton will get them ready for the start of ACC play.

17) Kansas Jayhawks (8-2)
LW: 15
Kansas somehow avoided disaster late in their 73-72 win over Nebraska, snapping their two-game losing streak. Udoka Azubuike (26 pts, 10 rebs) had a career night, but the Jayhawks' backcourt continued to struggle and they got virtually no production from their bench. KU certainly has plenty of warning signs as we gear up for the start of conference play.

16) Gonzaga Bulldogs (9-2)
LW: 14
Gonzaga drops despite their win because beating North Dakota in overtime - after a big comeback, no less - is not a quality win. However, much of that can simply be chalked up to an off-shooting night for one of the best shooting teams in the country

15) Arizona Wildcats (8-3)
LW: 18
Arizona is looking like the team we all expected them to be in the preseason and easily handled New Mexico on the road over the weekend. They're improving defensively while Allonzo Trier (22.3 ppg) and Deandre Ayton (19.9 ppg, 12.0 rpg) have kept their offense playing at a high level. Still, we can't just ignore what happened in the Battle 4 Atlantis. A win over Arizona State on Dec. 30 would signal their official return to the elite tier of college basketball.

14) Purdue Boilermakers (11-2)
LW: 16
Purdue stretched their win streak to seven games thanks to a win over Butler in the Crossroads Classic this weekend. Led by Carsen Edwards (17.1 ppg, 4.0 rpg) and Isaac Haas (15.1 ppg, 5.2 rpg), the Boilermakers are clearly the second-best team in the Big Ten right now.

13) TCU Horned Frogs (10-0)
LW: 13
TCU didn't play this week and won't face anyone of consequence until the start of conference play.

12) West Virginia Mountaineers (10-1)
LW: 12
Another team in the Big 12 (showing the conference's depth), West Virginia continued to roll with a win over Wheeling Jesuit (apparently that's a school?). The Mountaineers also won't face anyone significant until the end of the month.

11) Wichita State Shockers (8-2)
LW: 5
Losing at home hurts for Wichita State, even if it came to a good team like Oklahoma. Their usually-stingy defense broke down against Trae Young and Oklahoma's high-octane attack, and without Markis McDuffie, they didn't have enough offense to keep pace. Luckily, McDuffie should return before the end of the month.

10) Xavier Musketeers (10-1)
LW: 9
I have to drop the Musketeers one spot because of that disastrous performance against ETSU even though they won the game. It was Xavier's worst shooting performance of the season and marked their largest comeback in 18 seasons at the Cintas Center.

9) Texas A&M Aggies (9-1)
LW: 11
A&M is another team that is essentially off until the start of conference play, beating Savannah State 113-66 in their last outing with Northern Kentucky and Buffalo upcoming on the schedule.

8) Miami Hurricanes (9-0)
LW: 8
Miami continues to win and keeps their undefeated record intact, which will cause them to continue to rise in the AP poll. However, their only notable win came over an underachieving Minnesota team, so we don't really know how good they are. We'll find out this weekend when they go to Hawaii to take part in the Hawaiian Airlines Diamond Head Classic.

7) Kentucky Wildcats (9-1)
LW: 7
Kentucky continues to take steps in the right direction with a hard-fought win over a good Virginia Tech team as Kevin Knox (15.8 ppg, 5.7 rpg) and Hamidou Diallo (15.2 ppg, 4.7 rpg) have emerged as this team's leaders. Their next two games are against UCLA and Louisville leading into conference play.

6) North Carolina Tar Heels (10-1)
LW: 6
Winning on the road over a good Tennessee team was big for UNC, but even bigger was the play of freshmen big men Garrison Brooks and Sterling Manley, who had eight rebounds apiece. If they can continue to give the Heels that much production on the glass, watch out for the Heels.

5) Oklahoma Sooners (9-1)
LW: 24
We've touched on Oklahoma and Trae Young (28.8 ppg, 8.9 apg) at the top, but their win over Wichita could be the second-most impressive thing any team has done this season (with Arizona State's win at Kansas being the first). Young continues to be the best player in the country who does everything for this team, but it was his supporting cast that stepped up in the second half of that win over the Shockers. They'll be tested again by Northwestern on Friday.

4) Arizona State Sun Devils (10-0)
LW: 4
Arizona State survived their first game as the hunted, beating Vanderbilt by 12 to earn the program's first-ever 10-0 start. This offense should be fine in their next two games against Longwood and Pacific before their Dec. 30 showdown against Arizona.

3) Michigan State Spartans (10-1)
LW: 3
The Spartans needed a 12-2 run late to get past Oakland as turnovers (17) again plagued them. Their ability - or inability - to take care of the ball will determine their success night in and night out. If they take care of the ball, they're pretty much unbeatable. However, if they don't, they're vulnerable to teams like Oakland.

2) Duke Blue Devils (11-1)
LW: 2
Duke didn't play this week, giving them more time to think about that loss to Boston College. They play Evansville on Wednesday before starting conference play against FSU on Dec. 30.

1) Villanova Wildcats (11-0)
LW: 1
Villanova showed - once again - that they're the best team in the country with an 87-67 win over Temple this week. They'll host Hofstra on Friday before starting Big East play next week.