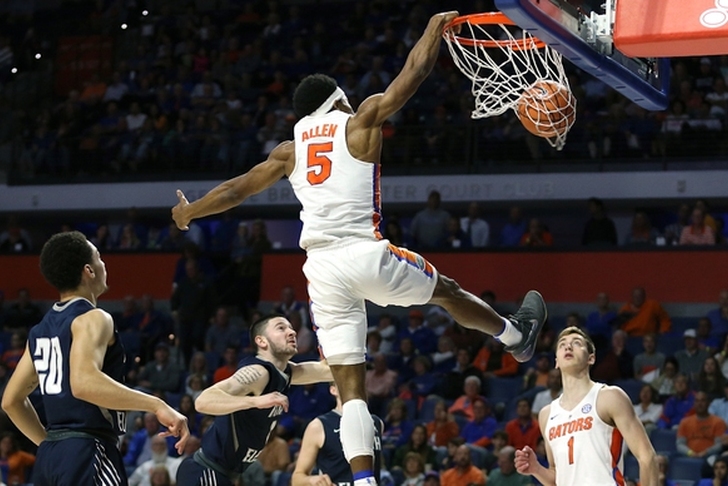 Welcome to the first mailbag of the college hoops season! We're going to be posting these every Wednesday throughout the course of the season, and now that we're nearly two weeks into the new year with plenty of high-quality tournaments coming this weekend, we're starting to get some idea as to who these teams are - which lead to questions about your favorite team.

As always, I'm here to discuss the topics and answer the questions you want to ask. Hit me up on Twitter or Facebook if you want to join the conversation! Now, let's get into it:

How deep will Gators go? What hurdles do they need to overcome to make it to Elite 8 or beyond?

Florida has all the tools to make a long tournament run as five key players are back from last year's Elite 8 team. KeVaughn Allen (10.7 ppg, 4.3 rpg) hasn't lived up to preseason expectations but transfers Egor Koulechov (20.0 ppg, 8.0 rpg) and Jalen Hudson (18.3 ppg) have emerged as top-end players, giving the Gators even more depth. We know they like to shoot threes, but it's their defensive efficiency (seventh nationally in KenPom) and ball security (fourth-fewest turnovers in the country) that makes them a top 10 team. All of that gives this team the tools to make a long tournament run - but the biggest hurdle is getting Allen to play well consistently.

What are realistic and stretch goals for Texas Tech this season? Over/under wins?
Thanks!

The most realistic goal for Texas Tech is to make the NCAA Tournament. That should be the expectation for a program that only has one tournament berth since 2006 and returns all their key pieces from last year's 18-14 team. As for stretch goals, the Red Raiders could finish in the top three in the Big 12 and be a Sweet 16 team. The conference is wide open behind Kansas given West Virginia's early-season struggles and Tech's 85-49 win over Northwestern was extremely impressive. I'd put the over/under at 22.5 wins. As long as Keenan Evans (19.5 ppg) continues dominating and their defense is among the best in the country, they will be very good.

No team is going to want to see themselves paired up with Vermont in the first round of the NCAA Tournament. The Catamounts only lost by four to Kentucky at Rupp Arena earlier this season after winning 29 games and nearly upsetting Purdue in the tourney last year. They return 62 percent of their minutes from that team and have five players averaging double-figure points. A lack of size is what killed them against Purdue but they have the guards to compete with anyone.

As for Ohio State, I don't see how they make the tournament right now. Chris Holtmann is going to be a very good coach for the Buckeyes and they've beaten lesser competition to this point - Keita Bates-Diop (19.3 ppg, 10.0 rpg) looks solid and Jae'Sean Tate (15.3 ppg, 7.5) has been good - but I just don't think this team has enough depth to really be a factor in the Big Ten.

That’s on tyus battle... les lighting it up right now

Autocorrect can get you sometimes, eh? Battle and Syracuse have looked good in their first four games, though those games have all come against lesser competition. The Orange are dealing with a lot of turnover this year and needed a go-to guy to step up, which Battle (23.0 ppg) has been. He's also shooting 53.3 percent from the field and 42.9 percent from three, showing that he's playing efficiently and not just jacking up shots. It's certainly a step in the right direction, but I want to see how he does in their upcoming three-game stretch against Maryland, Kansas, and UConn. If he continues to perform against quality competition, he could become an All-ACC guy.

Reasonable expectations for Pat Ewing and the Hoyas? - @Ppuro31

It's going to be a long year for Georgetown, but that's fine. Anything other than last place in the Big East will be considered a success given the lack of talent currently on the roster. Ewing will have the Hoyas back to relevance in a couple of years. The expectations should be to develop and establish some young core players and continue to build on their strong recruiting class.

Who ends up having the most success at their respective program: Cuonzo Martin at Mizzou or Brad Underwood for the Illini? - Jason Schwartz (@jcschwa14)

Easily Underwood at Illinois. He's won everywhere he's been, has been recruiting at a high level already, and will have the Illini playing tough, physical basketball and great defense sooner rather than later. On the other hand, Martin can recruit, but his actual coaching skills often leave much to be desired. He hugely underachieved during his tenure at Cal despite having top-tier talent because of that. His teams have traditionally struggled in the halfcourt because of his ineffectiveness drawing up sets, and that's not a good sign in an improved SEC.

Oakland is the heavy favorite in the Horizon League for me with Illinois transfer Kendrick Nunn serving as a real difference-maker for them. The only question with them will be how they do in the conference tournament, something that has unexpectedly tripped them up each of the last three seasons.

Really looking like Wisconsin is headed towards a down year. Simply no one around Happ

Got a lot of pushback and questions in response to this, so I figured I'd include it on here. They're now just 2-3 on the season following losses to Xavier, Baylor, and UCLA, but this isn't recency bias. The Badgers were picked to finish eighth in the Big Ten and haven't alleviated any of those preseason concerns. Ethan Happ (19.0 ppg, 9.8 rpg) has been as good as advertised, but no one has stepped up around him to replace the losses of Bronson Koenig and Nigel Hayes. Both of those losses were to good teams, yet they trailed by double-digits in each game - not exactly the sign of a team controlling the game.

They don't rebound the ball well (279th nationally) and don't move the ball that well, assisting on less than half of their field goals (233rd nationally). Freshman Brad Davison looks like he'll be a really good player for the Badgers in time, but outside of him and Happ, Wisconsin simply doesn't have much to offer.