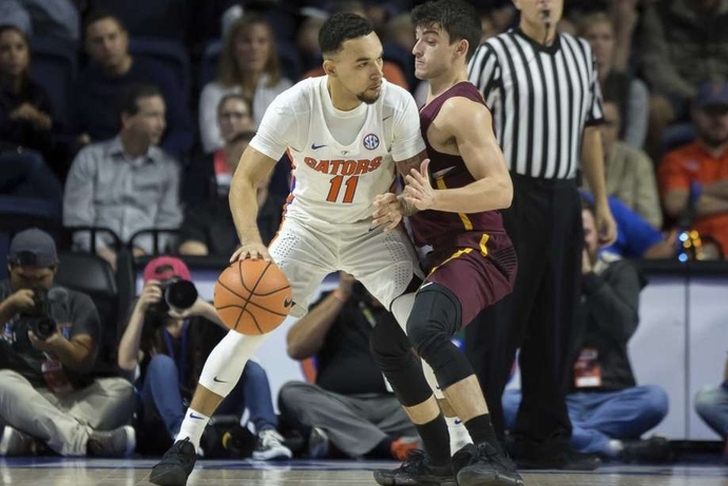 The college basketball season continues to roll right along, providing us with nightly entertainment. There have also been plenty of upsets this week with four top 10 teams going down to unranked foes - something that could become the norm this year. We're going to be posting these every Friday throughout the course of the season to try and help answer those questions. Hit me up on Twitter or Facebook if you want to join the conversation! Now, let's get into it:

Dook ranks 313th in the nation for % of points on 3s and 287th in bench minutes. Seems like a recipe for disaster if the bigs (Bagley / Carter) get in foul trouble. Will Dook struggle more than we think during ACC play? - @Ppuro31

The biggest problem with either Marvin Bagley III or Wendell Carter Jr. getting in foul trouble is Duke's lack of depth, not their three-point shooting. The reason why they aren't shooting as much from three is because of the dominance of Bagley and Carter in the post and Trevon Duval's ability to attack. Duke has been more than willing to throw the ball to Bagley or Carter in the post and to run their offense through them, which leads to them not shooting as many threes.

Of course, if one of those bigs get into foul trouble, that will change. Both Grayson Allen and Gary Trent Jr. are knockdown shooters from distance, and Duke's offense would shift to a drive-and-dish game with Duval, similar to what the Blue Devils did in their win over Michigan State when Bagley was injured.

Duke's eight-man rotation creates concerns about a lack of depth, but Coach K is an expert at massaging his lineups for a certain period of time until the foul trouble isn't as big of an issue. That lack of depth will be more of a problem if a starter suffers an injury rather than foul trouble. That would be the only situation that would concern me.

After last night, is Florida’s start a facade or is this a little blip (a la Arizona)?

It's a little bit of both. Weird stuff always happens around finals in college basketball because players aren't entirely focused on basketball, though Florida won't use that as an excuse. There's no way around the fact that they were soundly beaten in phases of the game for Florida State, who gave teams the defensive blueprint to slow Florida's high-powered offense - take away the three-point shot and UF struggle to score points. The Gators have also gone away from playing team ball, recording just seven assists in each of their last two losses.

Those things are reasons for concern, but Florida simply hasn't shot it well of late. In both the FSU and Loyola-Chicago losses, they shot less than 37 percent from the field, which isn't going to get it done 95 percent of the time no matter who you are.

So, no the start was not a facade - the Gators can be really good. But this will turn into more than a blip if head coach Mike White doesn't correct some things.

Gonzaga, legit title contender or just another good but flawed team who would be lucky to make it to second weekend?

Neither. Again, they'll be somewhere in the middle. Gonzaga ran into a buzzsaw named Villanova in Madison Square Garden which was expected, as the Wildcats have established themselves as one of the clear-cut three best teams in the country (along with Duke and Michigan State).

Defense is a growing concern for the Bulldogs, yet they have the offense to score with almost everyone - and Mark Few is going to fix those defensive lapses sooner rather than later. Obviously, as with anything NCAA Tournament-related, how far a team goes largely depends on matchups. This group won't be making a return trip to the championship game but should still expect to make the Sweet 16.

Western Kentucky certainly looks like a tournament team, especially once everyone gets healthy and/or eligible. Those wins over Purdue and SMU at the Battle 4 Atlantis were nice, but unless they go undefeated or only lose a couple of times in Conference USA play, they'll need to win the conference tournament. However, should that happen, they have the potential to be dangerous.

As for Ohio State, Holtmann has made them a viable team in the Big Ten even though they aren't necessarily "good," but they will be able to post a better record than expected if they continue to play with this level of competitiveness. I broke down the Buckeyes and their tournament chances here, so check that out if you want a more in-depth look at Ohio State.

NEXT READ: Rauf Report: Why Ball Family Leaving UCLA Is Good For Both, Ohio State's Tournament Chances & More Takeaways From The Week Of College Basketball

Should St. John's be a tourney team this year?

Yes. The Big East is tough with Villanova being Villanova, both Xavier and Seton Hall solidifying themselves as top 20 teams, and Creighton flirting with the bottom of the top 25 all season long. That said, St. John's backcourt of Shamorie Ponds and Marcus LoVett should be enough to carry the Red Storm finish fifth or sixth in the conference, which should be enough to earn themselves a bid. They're 8-1 with solid wins over UCF and Grand Canyon (along with victories over Nebraska and Oregon State, which could improve if both do well in conference play), and if they can upset Arizona State tonight, they'll be in excellent shape.