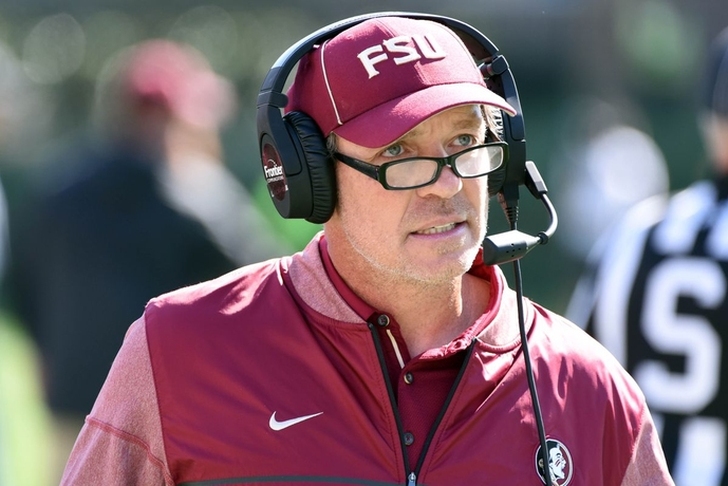 In addition to it being rivalry week, this past weekend in college football was the ultimate coaching carousel.  Arizona State and Texas A&M fired their coaches on Sunday. Florida, Ole Miss, and UCLA made head coaching hires. And Tennessee became the joke of the college football world following the supposed hiring, then un-hiring of Ohio State DC Greg Schiano. In today's coaching rumors roundup, we have all the biggest storylines from around college football to get you up to speed after one of the craziest news days in recent memory.

Tennessee AD John Currie Issues Statement
After coming to an agreement to hire Greg Schiano as it's next head football coach, the backlash from Tennessee fans and politicians forced the Vols AD John Currie to back out of a signed Memorandum of Understanding with the former Rutgers and Buccaneers head coach.

The search to find a new head coach for the Vols is still on after the Schiano debacle. Chat Sports' Harris Rubenstein broke down the top five candidates for the Tennessee job this morning on The Cam Rogers Show podcast.

Also of note, Fox's Bruce Feldman is reporting that former Vol QB and current USC OC Tee Martin has a legit shot at becoming the next Tennessee head coach in the wake of the Schiano fiasco:

Hearing that #USC OC Tee Martin, a #Vols legend who led UT to a national title, has a legit shot at the #Tennessee HC vacancy in the wake of yesterday’s mess.

A&M Offers Jimbo Fisher?
The next biggest story on Sunday was not Texas A&M's firing of Kevin Sumlin, but the news that the Aggies have made an offer to Florida State coach Jimbo Fisher. While most college football fans would scoff at the notion of Fisher leaving FSU for A&M, the Houston Chronicle reported that there may be reasons outside of football weighing on his decision:

A person familiar with the entire process said while Fisher is divorced, his former wife and two young sons would also be willing to leave Tallahassee, Fla., to be closer to the father in his new job. The youngest son has Fanconi anemia, a life-threatening medical condition, and Houston's expansive medical center is considered one of the best in the world.

Reports out of Houston make the deal seem imminent:

Sources w/knowledge of TAMU search process tell me Jimbo-Fisher has a deal to be next Head Coach @AggieFootball .Fisher will coach 1 final game at FSU but not Bowl game should they become eligible. I'm told his TAMU contract will be at least 5 yrs/7.5 million per year. @KPRC2

In his post-game press conference after Saturday's win over Florida, Fisher was non-committal regarding his future, though he did say he hopes Saturday's game would not be his last in the series. “I love this Florida-Florida State game, I hope not. That’s for sure,” Fisher said.

If Fisher were to leave Florida State for another coaching job, he would owe the school at least $7 million to cover costs associated with assistant coaches and other football personnel still under contract.

Scott Frost To Nebraska?
After another disappointing season, Nebraska fired head coach Mike Riley after three seasons in Lincoln. Firing Riley wasn't a cheap decision considering the school is still paying the buyout of former head coach Bo Pelini. Between Riley and Pelini, the school will be paying former coaches a total of $4,172,126 between now and February 2019. Once Pelini is off the books in 2019, Riley would be owed another $4.8 million through Feb. 28, 2021, as long as he doesn’t obtain another job.

Now that Riley is officially out, the search is on for Nebraska's next football coach, but according to ESPN’s Chris Fowler, the search is over and has been for a while. The ESPN analyst said on Twitter that former Cornhusker QB (and current UCF head coach) Scott Frost will return to Lincoln to coach the program he lead to a split national title in 1997:

With Frost leading undefeated #12 UCF against #16 Memphis in the AAC Championship Game this Saturday, Cornhusker and UCF fans will likely know on Sunday or early next week whether Frost will return to his alma mater or remain on the sidelines at UCF.

Oregon State Has New Head Coach Candidate
On Friday, Cal OC Beau Baldwin was reportedly going to be the next head coach at Oregon State but as of now, he has not been hired. The delay in the process certainly doesn't mean it won't happen, but today Fox Sports reporter Bruce Feldman reported that Stanford Cardinals DC Lance Anderson has emerged as a viable option at Oregon State:

I'm told #Stanford DC Lance Anderson has emerged as a very viable candidate for the #OregonState HC job. He also is in the mix for the Rice HC vacancy.

USA Today's Dan Wolken followed up on Feldman's report with a tweet claiming that Anderson is interviewing for Oregon State job today:

Have heard #MissState has some interest in #Michigan passing game coordinator Pep Hamilton for its head coaching vacancy.. Sources have told me Hamilton is also a strong candidate for the #ASU HC opening: https://t.co/6UYEVpz51o

This morning on The Cam Rogers Show, Rubenstein also gave his top five candidates for both Mississippi State and Arizona State’s head coaching jobs. While Rubenstein doesn’t see Hamilton as a top candidate for MSU, he is in the mix for the Sun Devils:

To stay updated on all of the crazy world of college football coaching rumors over the next few days and weeks, download the Chat Sports app and enable push notifications to be alerted any time there is a major breaking story in college football.