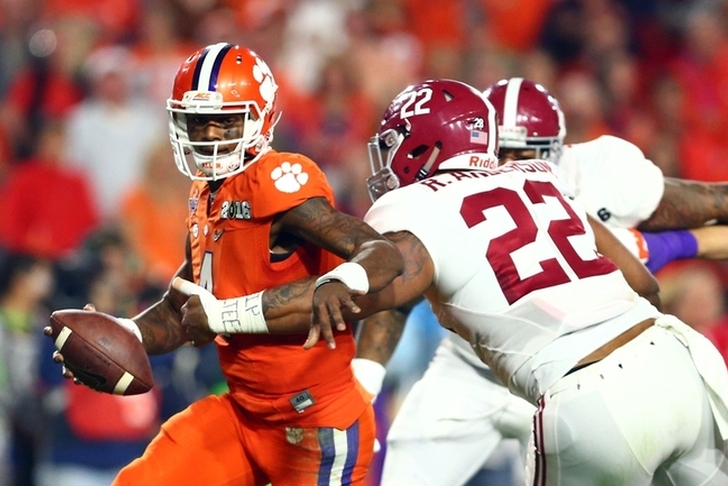 The Alabama Crimson Tide and Clemson Tigers face off on Monday night in the College Football Playoff championship game for the second straight season, the first time the sport's title game is a rematch of the previous season's title game. Alabama won last year by a 45-40 margin - largely thanks to an onside kick by Alabama in the fourth quarter - and Clemson has spent all season trying to get back to this point to get revenge.

Will Alabama win their second straight national championship - their fifth in eight years - or will Clemson win the second national title in program history? Here's our preview and prediction.

Key to the game: Turnover Battle
Ball security has been a huge problem for Clemson all year. They turn the ball over an average of twice per game, which ranks them 112th in the country (out of 128 teams). That problem has affected Deshaun Watson in particular, as he has thrown 17 interceptions this season.

On the flip side, Alabama is one of the best teams in the country in forcing turnovers, getting 1.9 takeaways per game. And when they force those turnovers, we know what they do - the defense has scored 11 touchdowns this season off of turnovers. A rash of turnovers is why Clemson lost to Pitt earlier in the season, and the ability to force turnovers (and turn them into points) is the biggest reason why Alabama is undefeated. It will be the deciding factor in this game.

Prediction: Alabama wins 38-21
This game will be close for a while, but as the game wears on, Alabama's defense is going to make it's mark. For all the talk about how Deshaun Watson shredded the Alabama defense last year, many blame that performance on a lack of preparation from then-Tide defensive coordinator Kirby Smart, who had already taken the head coaching job at Georgia. Alabama's defense is totally focused this time around, and just as Clemson wants to get revenge for last year's loss, that defense is looking to avenge what they called an "embarrassing" performance against the Tigers. They'll be the difference in the second half.