So, Who's Going to Hire Ed Orgeron? A List of Possible Destinations 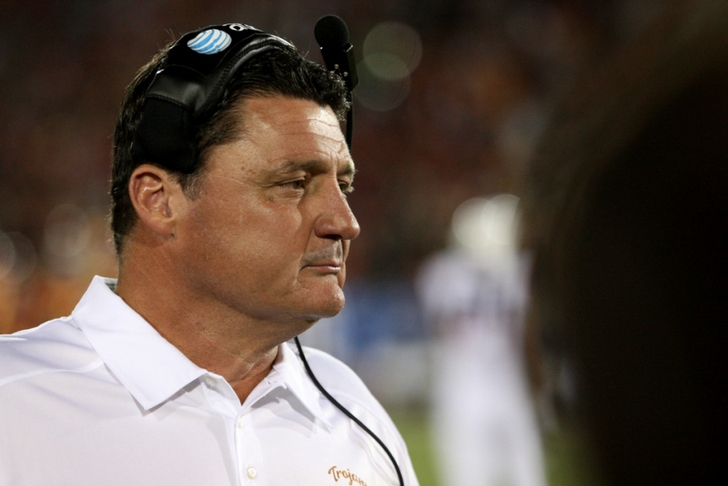 USC announced on Monday that Washington's Steve Sarkisian will be the Trojans' head coach next year. Sarkisian, who spent seven years as a USC assistant before taking over at UW, will fill the vacancy left when Lane Kiffin was unceremoniously canned in the LAX parking lot.

There's only one problem: USC already had an interim head coach who everyone loved. Defensive line coach and recruiting coordinator Ed Orgeron took over for Kiffin, rallying a wounded program and going 6-2 with a marquee win over Stanford. Orgeron had won over the players, but apparently didn't do enough to win over athletic director Pat Haden. Coach O was apparently so outraged about being passed over for the head coaching job that he resigned on the spot.

A 35-14 loss to UCLA took some of the gloss off Orgeron's record, but the job he did resurrecting USC's season shouldn't be understated. Orgeron immediately becomes one of the hotter head coaches on the market, and there are a number of mid-level programs who would be crazy not to reach out to Coach O. While major programs like Texas will be aiming higher, here are the schools we expect to contact Orgeron in the near future:

There are already rumors floating around that Orgeron is the top candidate for the FAU job. It doesn't make a whole lot of sense to us (after HC jobs in the SEC and the Pac-12, a step down to C-USA seems a little...off), but let's take a look at what the (currently vacant) Florida Atlantic job could bring to the table.

At FAU, Orgeron would have the chance to build a program that could win a conference title in a short amount of time. No one coaching in the Conference USA has anything close to Orgeron's recruiting clout, and if he wanted to build a conference-winning team that regularly went to bowl games, this would be the place to do it. The FAU job would be more of an audition than anything else, and it could be the stepping stone to another major job a few years down the line.

The Demon Deacons are an intriguing option because of the freedom they'd give a guy like Orgeron - he wouldn't need to worry if it takes a few seasons to right the ship. Wake Forest can easily afford Orgeron, and he'd be an excellent replacement for Jim Grobe, who just resigned after 13 seasons in Winston-Salem.

The ACC is a great place for Orgeron to establish a program - he won't have to overcome a nightmare SEC schedule like he did at Ole Miss, but the conference is still strong enough to bring in top recruits. Wake makes a lot of sense, but there's one school that we think has by far the best chance of landing Coach O...

It was just seven years ago that the Golden Bears were a few plays away from being the #1 team in the country. That all came crashing down with a loss to Oregon State that torpedoed Cal's season, and Jeff Tedford never seemed to get his mojo back after the 2007 meltdown. Fresh off a humiliating 1-11 season under rookie head coach Sonny Dykes, the Bears are in dire need of a spark.

So, why would Orgeron want anything to do with the mess in Berkeley?

It's a simple answer - revenge. The Cal job offers Orgeron the freedom to build a program his way from the ground up, and prove to USC what a huge mistake they made letting him go. The chance to face USC in the Pac-12 championship game should be enticing enough to get Orgeron on board.

You Won't Believe What Google Thinks of Your Favorite Teams