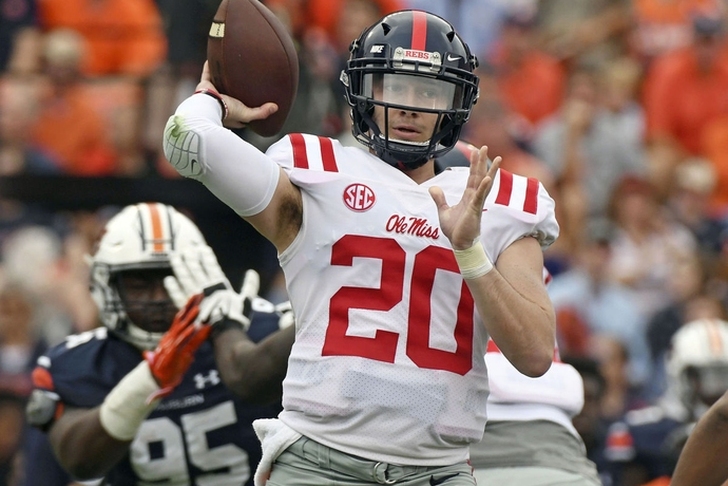 The pending NCAA punishment against Ole Miss, who is accused of 15 Level I violations, could cost them more than just some future bowl games - it could cost them their starting quarterback.

Shea Patterson was the No. 4 overall prospect in the 2016 recruiting class, according to the 247sports Composite, and took over as the Rebels' starter at the end of the last season when Chad Kelly got hurt. However, he debated transferring this offseason following the Hugh Freeze firing and the NCAA case but opted to return to Oxford, where he began the season as the starter.

Patterson put up eye-popping numbers in the first seven games of the season, passing for 2,259 yards with 17 touchdowns and nine interceptions before suffering a season-ending knee injury. His backup, Jordan Ta'amu, then took over and has also played well, throwing for 1,682 yards with 11 touchdowns and four interceptions while rushing for 165 yards and four more scores. Ta'amu also has a 3-2 record as the starter (Patterson was 3-4).

Now, with pending NCAA sanctions and a potential position battle brewing, Patterson is rumored to be looking (again) into transferring. There's also the chance that he could be immediately eligible for his new school if Ole Miss receives a bowl ban longer than their one-year self-imposed ban.

So, if he does look to transfer, which schools could land the former five-star recruit? Here are the seven most likely options:

7) Oklahoma Sooners
Baker Mayfield will be heading to the NFL after the season, and while the Sooners do have another five-star quarterback behind him in Texas A&M transfer Kyler Murray, there's still a chance they pursue Patterson to create a competition at the position (some scouts think Patterson is a much better player and prospect than Murray). While there is that chance, I don't see him transferring to be part of a competition, which is why they're at No. 7.

6) Oklahoma State Cowboys
The other school in Oklahoma is looking to replace an early draft pick at quarterback in Mason Rudolph, and they don't have a high-profile backup behind him. Head coach Mike Gundy's high-powered offense would give Patterson plenty of opportunities to flourish as a dual-threat QB, and his addition could keep the Cowboys in the College Football Playoff picture.

5) LSU Tigers
It feels like LSU has been looking for a quarterback forever, and with starter Danny Etling out of eligibility after the bowl game, the Tigers need someone to replace him. Enter Patterson (a Louisiana native), who would immediately be the best quarterback they've had in Baton Rouge since JaMarcus Russell. This move would give him the opportunity to stay in the SEC and play for a championship contender, but a move to a team in the same division could very easily (and likely) be blocked by Ole Miss or the NCAA.

4) Texas Longhorns
Head coach Tom Herman has expressed multiple times throughout the season that he's not thrilled with either Shane Buechele or Sam Ehlinger at quarterback, and the Longhorns have enough talent everyone else to be a legitimate contender in the Big 12 with solid quarterback play. Herman tried to land a grad transfer this past offseason and could be in the market for a transfer again - and Patterson would be the best one available.

3) USC Trojans
USC needs a replacement for Sam Darnold and the Trojans went hard after Patterson in high school. Many thought that they finished in second to Ole Miss in his recruitment, and with their need at the position, it makes sense. They'd also allow him to compete for a national championship and play in a pro-style system for NFL scouts.

2) Michigan Wolverines
Let's start with why Patterson is interested in Michigan. His dad is a Michigan fan, the family used to have season tickets, and his dad said that he "always thought he would have played at Michigan or Notre Dame." Patterson admitted as much this summer, saying that he "had dreams of playing in the Big House." The Wolverines also need a quarterback given the lackluster play they got from the position - and how it killed their offense and chances of being a contender this year.

If he's eligible immediately, it'd be easy to see head coach Jim Harbaugh bringing him on board. Plus, Patterson would turn Michigan into a national championship favorite.

1) UCLA Bruins
The Chip Kelly factor plays a major role in this. Josh Rosen likely won't be back at UCLA and the Bruins need a replacement - and Patterson looks to be a perfect fit in Kelly's system. Considering that he's looking for a championship-caliber team (UCLA has talent) with an offensive-minded coach, the Bruins appear to fit the criteria better than anyone.