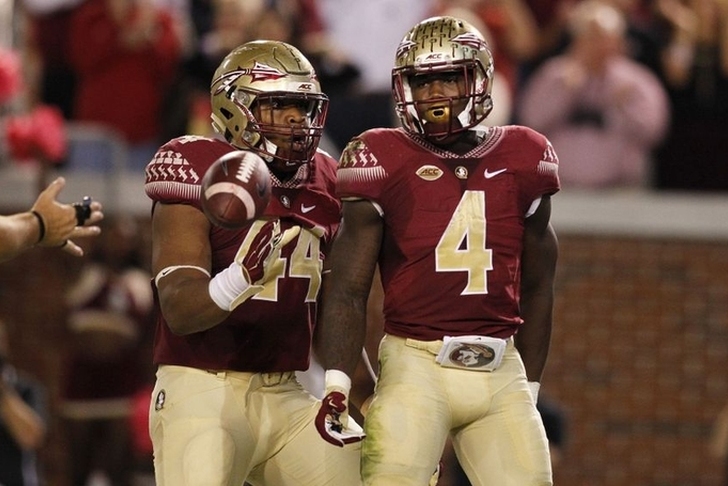 The Florida State Seminoles came out fast with a dominant first quarter, lost the lead in the final two minutes, then pulled off a comeback of their own to get a 33-32 win over the Michigan Wolverines in the Orange Bowl.

Florida State took the lead on their opening drive, marching 75 yards in just over three minutes to take the early 7-0 lead. After both sides traded field goals, the Seminoles built a commanding 17-3 advantage with a 92-yard touchdown pass from Deondre Francois to Nygwan Murray - the longest pass in Orange Bowl history.

Defenses for both sides took over from there, and it wasn't until the third quarter that Michigan found the end zone on his pick six from Mike McCray:

After Florida State answered with a touchdown, yet Michigan would answer once again. The Wolverines scored twice in the last 5:30 - their only offensive touchdowns in the game - taking a 30-27 lead on this 30-yard run from Chris Evans:

Of course, this game was not done! FSU returned the ensuing kickoff into Michigan territory, and on third down in the red zone, Francois found Murray again for the game-winner:

Cook led the way for FSU the entire night, finishing with 145 yards and a touchdown on 20 carries while catching three passes for 62 yards. Francois completed just 9/27 passes, but threw for 222 yards and a two scores while rushing for another.

Michigan's offense struggled for most of the night, but caught fire late as quarterback Wilton Speight finished with 163 passing yards. Evans also finished with 63 yards and a touchdown on just eight carries.