Who Will Be NBA MVP? 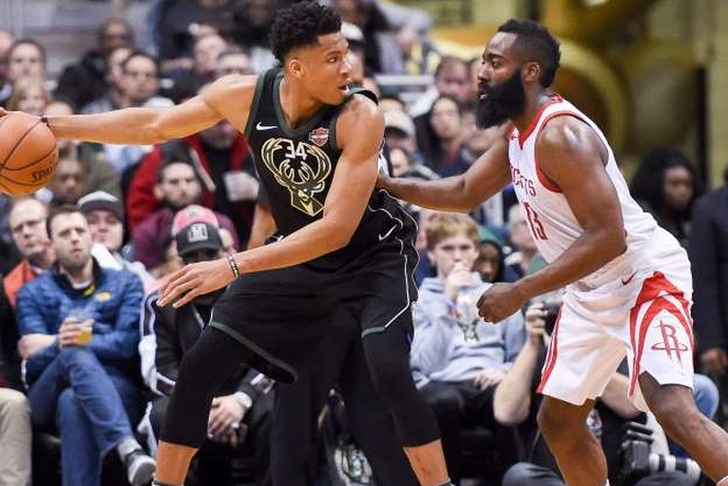 We’re no longer in the early stage of the NBA season. With only six weeks left, the list of MVP candidates has narrowed to a small selection of serious contenders.

The award is decided by a panel of eleven members of the media, who cast votes after the conclusion of the Finals, and the person with the highest number of votes will win the MVP award. In order to win the award, scoring the most points is not enough – according to Fran Blinebury at NBA.com, it’s also about 'being able to affect a game, a season, a franchise in many different ways.'

But the question occupying fans and live betting sites is – which player will win MVP in 2019? Here’s a list of five candidates to inform you on who to back. James Harden is the clear favourite, followed by Giannis Antetokounmpo (+155), Paul George (+900), Stephen Curry (+1400), and Joel Embiid (+1600).

Houston Rockets' James Harden is the favorite contender for the prize. Many believe he’s Giannis Antetokounmpo’s biggest competition and that this is Harden’s award to lose. Harden was named MVP for the first time in his career last season but has since taken his game to another level this year, averaging a NBA-best 34.8 points per game. Goldberg goes on to state that this would be highest scoring average for any player. ‘Koba Bryant scored 35.4 points per game in 2005-06. Before that, you have to go back to Michael Jordan to match this scoring level.

Millwaukee Bucks star Giannis Antetokounmpo is another serious contender. His playing has dominated the league and analysts say that he can win MVP if Bucks win 55 - 60 games. He is currently guiding Bucks to a 45-14 record. David Hookstead at the Daily Caller commented, ‘The Greek Freak is on fire right now. He’s tearing up the NBA, just dominating his opponents and is now favored to walk away with the most important personal award in the sport. It’s crazy how a few years ago nobody knew his name, and now he might be the most physically dominant guy in the game.

Paul George is another one to watch. Grant Hughes at Bleacher Report stated, ‘He's surpassed Westbrook as Oklahoma City's best player, transitioning to a true alpha level after spending his career as a 1(b) talent. His recovery from a gruesome broken leg is also still fresh enough in the minds of voters to earn him a point or two.’ George is currently having the most glittering season of his career. He is averaging a career high in points, rebounds, assists, and steals, and that he is an elite defender and an offensive threat.

The final two contenders are Stephen Curry and Joel Embiid. Tony Pesta at Bluemanhoop commented about Curry, ‘his shooting, as usual, has been by far the most impressive aspect of his game. He has hit eight or more 3-pointers in four of his last seven games and is averaging 7 made 3-point field goals a game. This run from Curry is one of the most impressive streaks of his career. In fact, it was the first time in his entire career that Curry had three-consecutive games of 8 or more 3-pointers. In these three games, Steph averaged 40 points on 57.1 percent shooting from the 3-point line.

And finally, Joel Embiid’s slump is well forgotten, now that the Sixers have won seven of their last eight games. Embiid is averaging at 28.8 points, 13.6 rebounds, 3.3 assists, 2.8 blocks and 1.6 threes, while shooting 51 percent from the field and 43.3 percent from three.’

The list of MVP contenders is slowly being whittled away, but Harden and Antetokounmpo are the clear favorites to take away the prize this year, although there are a number of players worth keeping your eye on.