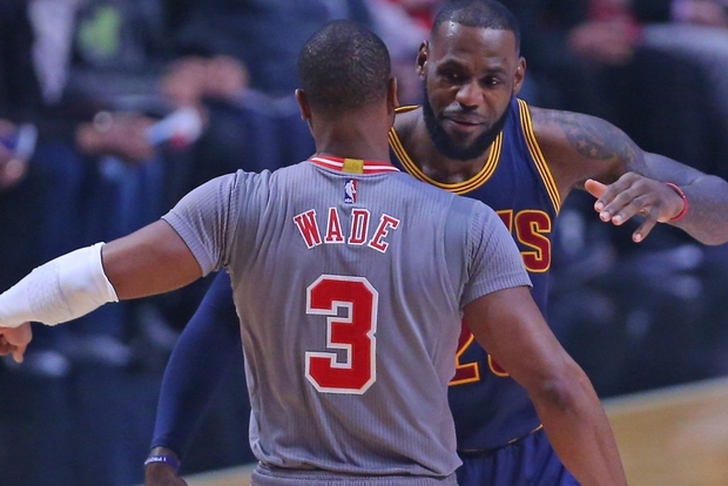 The new NBA season is underway for all 30 teams with the last training camps opening today. However, player movement around the league has not stopped as Dwyane Wade is currently a free agent following a buyout agreement with the Chicago Bulls. Here's the latest on that and other news and rumors you need to know in today's NBA Rumors Roundup:

Dwyane Wade nearing deal with Cavs
Wade is close to signing with the Cleveland Cavaliers and is expected to do so by tomorrow, according to ESPN's Adrian Wojnarowski.

Dwyane Wade is nearing a commitment to sign with Cleveland and could finalize decision as soon as Wednesday, league sources tell ESPN.

Wade was seeking a buyout in order to join a contender.

The 35-year-old, who took roughly $8 million less than the $23.8 million he was scheduled to make this season in the buyout, was also considering the Miami Heat and Oklahoma City Thunder. LeBron James' camp expected Wade to join Cleveland once he got his buyout.

Isaiah Thomas expected to return from hip injury in January
In other Cavs news, point guard Isaiah Thomas - who Cleveland acquired in the Kyrie Irving trade - isn't expected to play until January with a hip injury he suffered last season while with the Boston Celtics, the team announced in a press release.

"Isaiah Thomas has successfully continued with the rehabilitation process related to his right hip impingement. Based on his progress thus far and after several weeks of evaluation and monitoring with the Cavaliers medical team and Cleveland Clinic Sports Health, the team and Thomas are hopeful he will be in position to return by January. His status will be updated again, along with any further timeline adjustments, after the start of the regular season."

Thomas is expected to start for the Cavs when he is able to return to the court. Derrick Rose will be the team's starting point guard in the meantime.

Thomas averaged a career-high 28.9 points and 5.9 assists per game last season. He also led the NBA in fourth-quarter points.

Russell Westbrook expected to sign extension with Thunder
The Thunder have offered Russell Westbrook a "supermax"  that would pay him over $200 million over five years, and while he has not signed that extension, he reiterated at media day that he intends to stay in Oklahoma City.

“Like I said before, man, this is a place I want to be,” Westbrook said. “I love being here. I'm excited about the season, obviously, with a lot of new changes.”

“I love being here. I love the fans. I love the people here. I'm back now to get a chance to simmer down and get everything situated. Obviously now with a few changes, I'm good. I like where I'm at. I like where our team is.”

Westbrook also said he hasn't signed the extension yet because he has been too busy this summer. He has until Oct. 16 to sign the extension.

Former teammate Enes Kanter, who was traded from OKC to the New York Knicks as part of the Carmelo Anthony trade, told the media that he expects Westbrook to sign the extension.

If Westbrook doesn't sign an extension, he can opt out of his contract after the season to become an unrestricted free agent. He became the second player in NBA history to average a triple-double (31.6 ppg, 10.7 rpg, 10.4 apg) last season.