NBA Rumors: Spurs To Meet With Leonard, What Pelicans Plan To Offer Cousins, And Heat Trying To Trade Whiteside 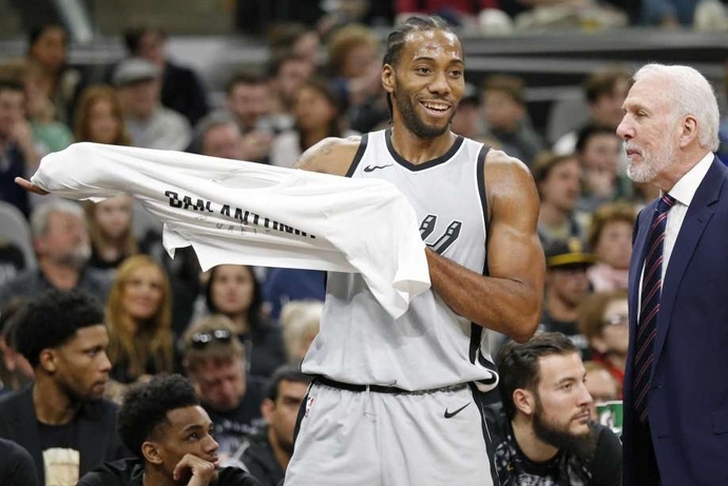 The NBA playoffs are well underway and two teams punched their tickets to the second round on Tuesday night with the Philadelphia 76ers and Golden State Warriors both advancing with 4-1 series wins. However, there is also plenty of happenings off-the-court as well as teams look towards the offseason. Here are all the latest NBA news & rumors you need to know:

Spurs to meet with Kawhi Leonard this offseason in an effort to repair their relationship
The relationship between the San Antonio Spurs and Kawhi Leonard deteriorated this season as Leonard stayed away from the team and only played in nine games this season due to a quad injury, and they could be willing to trade him this offseason if things don't get better between the two sides.

As such, they plan to meet with Leonard this offseason in an effort to repair their relationship, according to ESPN.

An all-hands-on-deck summer meeting with star forward Kawhi Leonard sits high on the priority list for the San Antonio Spurs, according to sources, as the team enters a pivotal offseason in the wake of Tuesday's 99-91 season-ending loss to the Golden State Warriors in Game 5 of the Western Conference playoffs.

With head coach Gregg Popovich expected to take the lead, the Spurs plan to meet with Leonard over the summer to gauge whether the sides can work out their differences and continue what has been largely a positive and productive partnership, sources said.

Leonard, who averaged 25.5 points, 5.8 rebounds, and 3.5 assists per game last season, will be an unrestricted free agent in 2019 and does not appear to be willing to re-sign with San Antonio. If he doesn't, the Spurs will be looking to trade him.

Pelicans plan to offer DeMarcus Cousins a short-term deal
DeMarcus Cousins is set to be an unrestricted free agent this offseason and will be seeking a max contract, but on the heels of him suffering a torn Achilles and the Pelicans sweeping their first-round series, New Orleans is going to offer him a short-term deal for less than the max, according to ESPN's Zach Lowe.

The Pelicans have broached internally the idea of offering Cousins a two- or three-year deal at less than the max, per sources familiar with the discussions. I would not expect that to go over well with Cousins' camp. But the Pelicans have the dual leverage of winning without Cousins and a tepid market for him.

Cousins averaged 25.2 points, 12.9 rebounds, and 5.4 assists in 48 games this season before suffering the injury.

The Heat is expected to explore a Whiteside trade, with the center due $24.4 million and $27.1 million in the final two years of his contract.