NBA Rumors: Latest On Jimmy Butler's Injury, Cavs Not Willing "To Do What It Takes" To Keep LeBron, & Ersan Ilyasova Buyout 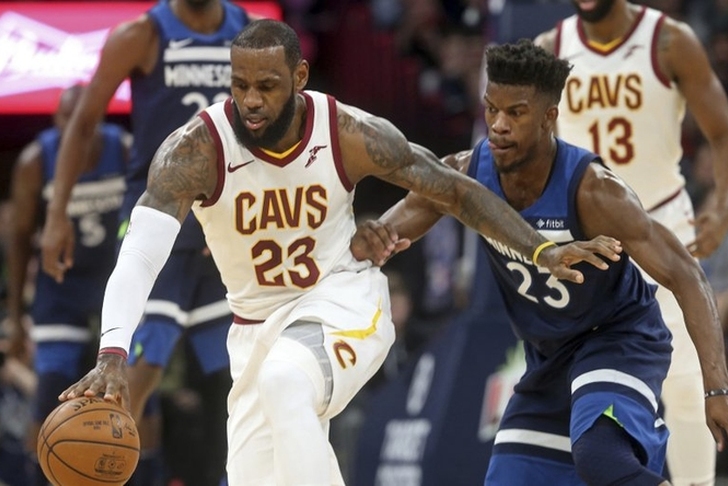 The NBA season got back in full swing after the All-Star break on Friday night with six games, headlined by the Cleveland Cavaliers' blowout win over the Memphis Grizzlies thanks to another triple-double from LeBron James and the Houston Rockets' 120-102 win over the Minnesota Timberwolves. However, Minnesota All-Star Jimmy Butler left the game with the knee injury. We have the latest on that story and more in today's NBA News & Rumors Roundup:

Latest on Jimmy Butler's injury
Butler left Minnesota's loss to Houston after suffering a non-contact knee injury, but after X-rays came back negative, the team believes he avoided an ACL tear, according to TNT's David Aldridge.

MRI Saturday will give final word, but there is some optimism in @JimmyButler camp that he may have at least avoided the worst—an ACL tear—on Friday.

The full extent of the injury will be revealed on Saturday following his MRI. Butler is averaging 22.2 points, 5.4 rebounds, and 5.0 assists per game this season.

The belief is that Gilbert, having reasserted control after chasing out Griffin, will rebuff James' request for a no-trade clause, or any other measures that give him leverage. And that will be enough to drive James away.

"Dan Gilbert's not going to do what it takes to keep him," the same source predicted. "Not a chance in hell he's going to give him a no-trade clause, or let him dictate contract terms."

James is expected to decline the $34.6 million player option on his contract for next season with the Cleveland Cavaliers in order to explore free agency. A number of teams, specifically the Houston Rockets, Los Angeles Lakers, and Los Angeles Clippers are planning to pursue him on the open market.

Hawks to buy out Ersan Ilyasova's contract
The Atlanta Hawks are expected to reach a buyout with forward Ersan Ilyasova in the coming days, according to Michael Cunningham of the Atlanta Journal-Constitution.

Hawks buyout agreement with Ilyasova is tentative but expected to get done.

Atlanta tried to trade Ilyasova prior to the trade deadline, but he exercised his contractual right to reject the trade offers the Hawks brought his way. Ilyasova, who will be an unrestricted free agent this offseason, is eligible for a larger contract this offseason because he wasn't traded.

He is averaging 10.9 points and 5.5 rebounds per game this season.