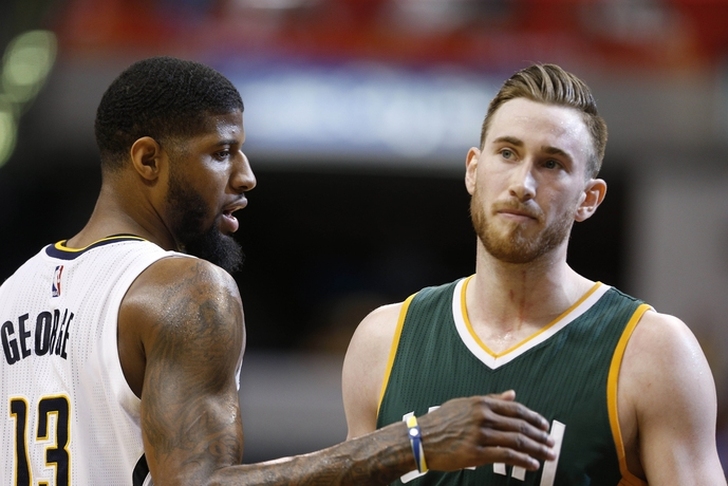 The 2017 NBA Draft order was finalized Tuesday night after the draft lottery, which has led to some clarity around what could happen with some of the big names linked to trades and free agency. With the offseason underway for all but four teams, the rumor mill around the NBA is kicking into high gear. Here are all the latest NBA rumors you need to know.

Lakers "Confident" In Ability To Sign Paul George
The Lakers and Paul George have been linked for some time now, as the Lakers want the superstar and the Pacers continue to struggle despite George's best efforts. Adrian Wojnarowski of The Vertical said in a recent video that the Lakers are "highly" unlikely to make a deal for George. However, they do think they can land him in free agency.

"For the Lakers, they are pretty confident and have a great deal of belief that they're in position to get Paul George in 2018," Wojnarowski said. "Whether he stays in Indiana or is traded elsewhere, he's going to be a free agent in 2018 if he doesn't re-sign this summer in Indiana. The Lakers don't have give up assets to go and try to trade for him. In fact, I think they've been encouraged to do just the opposite. If Paul George is going to go there he wants them to have assets. He wants them to be as good of a team as they can when he walks in."

The Lakers hold the No. 2 pick in this year's draft and have several talented young players. Adding George would, in theory, make them a clear playoff team. If the Pacers don't reach a long-term deal with George this summer, the rumor mill around George will continue to crank all season long.

Celtics "Focused" On Gordon Hayward
In that same video, Wojnarowski said the Celtics wouldn't pursue a deal for Jimmy Butler. Instead, they're focused on stealing Gordon Hayward away from the Jazz.

"Boston is really focused on trying to get Gordon Hayward from Utah in free agency," Wojnarowski said. "So why trade assets to get Jimmy Butler when you think you might have a chance at Hayward in the summer and you have the cap space to sign him in and you don't have to trade anything ... I think Boston preserves it's cap space and goes really hard after Hayward on July 1."

Hayward has long been an obvious target for Boston, thanks in large part to the presence of his coach at Butler, Brad Stevens. Hayward can become a free agent this offseason, if he opts-out of his contract as expected.

Mavs Interested In Jrue Holiday?
The Dallas Mavericks remain in a curious spot as a franchise, still trying to win games while Dirk Nowitzki is playing, but also trying to build for the future. Sticking with their "win-now" part of the plan is their reported interest in PG Jrue Holiday.

"One team that's interested in free agent point guard Jrue Holdiay? The Dallas Mavericks," ESPN's Ian Begley writes. "League sources say members of the Mavericks organization view Holiday as a free agent target this summer. Holiday will likely command top dollar on the market and Dallas would probably have to clear some cap space to make Holiday a competitive offer."

The easiest route for the Mavs to get some added cap space would be to get Dirk to take a pay cut. The Mavs' interest in Holiday will likely be affected by whom they get in the NBA Draft. If one of the top PGs is on the board, the Mavs could elect to add one and spend their cap space elsewhere. Holiday turns 27 before the next season and averaged 15.4 points per game and 7.3 assists per game for the Pelicans last year.