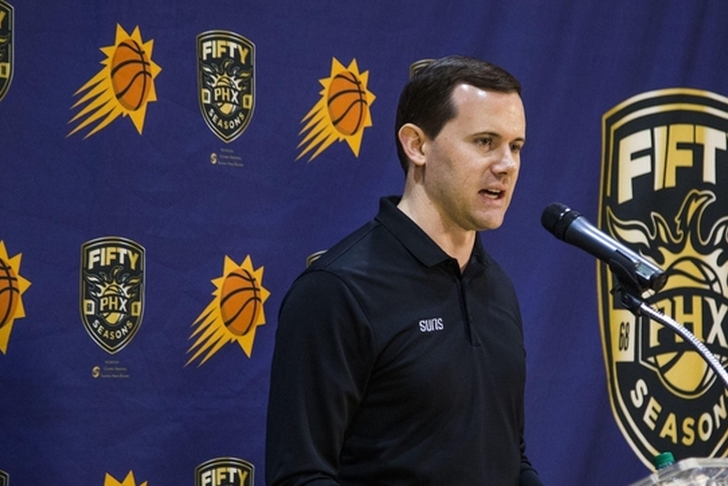 The 2018 NBA Draft order is set following Tuesday night's draft lottery with the Phoenix Suns claiming the No. 1 overall pick, but there's a chance they may not keep that selection. There are also plenty of rumors flying with the NBA Draft Combine taking place this weekend with players rising up and falling down draft boards. Here are the latest NBA Draft rumors you need to know:

Suns open trading No. 1 pick
While the Suns have the top overall pick for the first time in franchise history, there's a chance they won't be the ones actually making that pick. General manager Ryan McDonough told ESPN on Friday that the team is open to trading the pick - if it lands them one of a select group of elite players.

"We're certainly open to that. We'll consider it," McDonough said. "Obviously, we'll have more information closer to the draft than we do today, after we go through the workout process and the interview process and we get the medical physicals. So we're open to that.

"I think if you look around the NBA, as far as the veteran players, there are probably a few players we'd consider trading the pick for, outright, just pick for player No. 1. So it'll be a busy month for us."

Phoenix is projected to take Real Madrid star guard Luka Doncic with the top pick in our post-lottery mock draft.

Heat looking to trade for first-round pick
The Miami Heat don't currently have any picks in the draft, but they're going through all of their pre-draft prep as if they do and are in the market to trade for a first-round pick, according to Anthony Chiang of the Palm Beach Post.

The Heat could trade one of their current players to acquire a first-round pick or they can even deal next year’s first-round pick to get into this year’s first round. Because the Heat don’t have any 2018 picks to offer teams in an effort to move up in the draft, Kammerer doesn’t expect any first-round selection the Heat possibly acquires to be in the top 20.

“There’s a chance that you can trade somebody and acquire a pick maybe in the first round,” Kammerer said. “But the chances of us getting anything in the top 20 are pretty slim. So somewhere in the 20s, we think we might have an opportunity to get in the draft. So when we meet and we’re here and we have a very busy next six weeks, we’re always looking for somebody that we think would be good for our roster that we can acquire some way through a trade somewhere in the bottom of the first round. So we’re definitely focused in on that.”

Miami's own first-round pick in this year's draft belongs to the Suns and is sitting at No. 16 overall.

Kevin Huerter had as good of a day at the #NBACombine as anyone yesterday and Mike Schmitz just said on ESPN that NBA teams think he's a lock to be a first-round pick. He'll be one of the most interesting "testing the waters" players to watch before the deadline