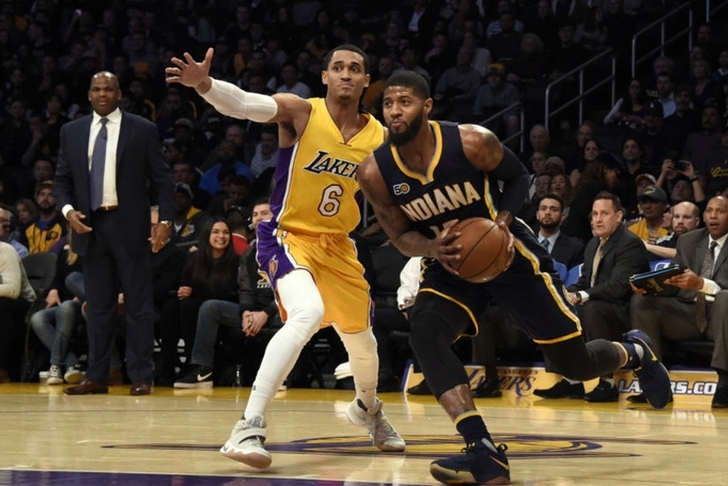 The 2017 NBA Draft is tomorrow, but there have already been a flurry of trades - and projected trades - that have generated a great amount of intrigue. Along with the rumors flying around about the futures of Paul George and Jimmy Butler, the Brooklyn Nets traded the No. 27 pick to the Los Angeles Lakers as part of a deal for D'Angelo Russell. The Charlotte Hornets and Atlanta Hawks also swapped second round picks as part of the Dwight Howard trade. Here are all the latest NBA Draft rumors you need to know:

Lakers refusing to offer draft guarantee to Lonzo Ball
After trading Russell, the Lakers are widely expected to select Lonzo Ball with the No. 2 overall pick, but they aren't telling him that. According to Mark Medina of the Los Angeles Daily News, they are refusing to give Ball a draft guarantee, even though is camp feels "encouraged."

As @ShamsCharania reported, Lakers did not guarantee to Lonzo Ball's reps they would select him. But I'm told his camp feels encouraged

Paul George trade "highly likely" before NBA Draft
Perhaps the reason why the Lakers haven't given Ball that draft guarantee is their negotiations with the Indiana Pacers about acquiring George. Medina reports that Los Angeles has offered Julius Randle or Jordan Clarkson, the No. 27 pick and the No. 28 pick to Indiana for George, but the Pacers are balking at the offer.

Nonetheless, Pacers will continue to talk to teams. I'm told it's "highly likely" Paul George gets traded before the draft.

The Pacers are known to want the No. 2 pick from the Lakers, which may be why LA hasn't given that guarantee to Ball. The Clippers, Wizards, Rockets and Cavs are also talking with Indiana about a possible George trade.

Mavs will take Frank Ntilikina if Knicks pass on him
The New York Knicks have shown a lot of interest in French point guard Frank Ntilikina with the No. 8 pick, but with news that they are also interested in Arizona power forward Lauri Markkanen, the Dallas Mavericks have some hope that he will be available when they draft at No. 9. If he is, Dallas plans to take him, according to Marc Berman of the New York Post.

French point guard Frank Ntilikina, after arriving at Liberty International Airport in Newark on Tuesday for Thursday’s NBA draft, denied a report his preference is to be drafted by the Mavericks over the Knicks.

Ntilikina, 18, reiterated the Knicks are a strong option for him because he fits well into triangle principles. The Mavericks have hired his Strasbourg coach, Vince Collett, for Dallas’ summer-league team. If the Knicks pass on Ntilikina at No. 8, the Mavericks, whose owner, Mark Cuban, flew to Venice recently to meet Ntilikina, are expected to nab him at No. 9.

“I have no preference like that,’’ Ntilikina told The Post. “All I need is to be in a really good project for me. I know it will all then depend on me. The NBA draft is just a step to the real goal — to make a big career in the NBA. I just want to be in a good project and atmosphere.’’

Ntilikina, who was born is Belguim, has been playing professionally for the French team Strasbourg since the 2014-15 season. He is averaging 5.2 points, 2.1 rebounds and 1.4 assists per game this season while shooting 48.5 percent from the floor and 43.1 percent from three-point range.