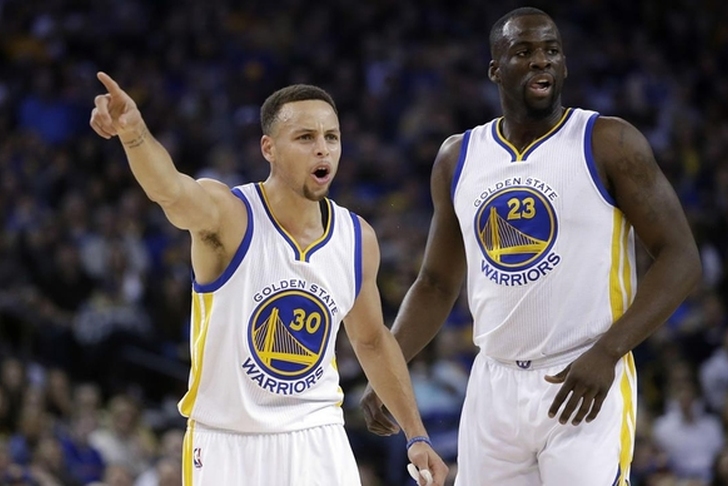 With less than a week left on the NBA calendar, the 16 teams headed to the playoffs are all but set in stone. With that said, most of these ball clubs have plenty to play for, whether that be improved seeding or a record chase.

Which takes us to Friday's biggest storyline: Will the Golden State Warriors choose to rest their starters down the stretch with 73 wins still within reach? After soundly defeating the San Antonio Spurs at home on Thursday, Warriors head coach Steve Kerr will reportedly meet with his team to decide whether or not to sit certain players in their final three games. Kerr said he is "inclined to give some guys some rest," but is in a tough spot with Stephen Curry and co. determined to top the 1995-96 Chicago Bulls' 72-10 mark.

No matter how Golden State fares in its final three games, the team has already etched its name into NBA history, becoming the second squad ever to win 70 games. Moreover, the Warriors have locked up the No. 1 seed in the Western Conference, and are in prime position to repeat heading into the postseason.

The same cannot be said for the Bulls and Houston Rockets, who essentially saw their playoff hopes go up in smoke with losses on Thursday. Let's preview the 10 games on slate for Friday, and what they mean in terms of postseason seeding.

What's On Tap:
Brooklyn Nets (21-57) @ Charlotte Hornets (45-33) - 7:00 p.m. ET
The Hornets are still within reach of securing home-court advantage in the first round with the Heat, Celtics and Hawks all within 1.5 games with four to play. The Nets have lost their last six games.

Miami Heat (46-32) @ Orlando Magic (33-45) - 7:00 p.m. ET
The Heat finish off the season with the same objective as Charlotte, as the No. 3 and 4 seeds in the East are within striking distance. They will play the in-state rival Magic, who just lost forward Aaron Gordon to injury (concussion).

New York Knicks (31-48) @ Philadelphia 76ers (10-68) - 7:00 p.m ET
Not a ton worth watching for in this matchup. The big story for the Knicks is who their head coach could be next season. Patrick Ewing has thrown his name into the hat, and interim coach Kurt Rambis is another option. The 76ers, meanwhile, just had GM and President of Basketball Operations Sam Hinkie turn in his resignation letter.

Milwaukee Bucks (32-46) @ Boston Celtics (46-32) - 7:30 p.m. ET
The Celtics welcome the Bucks to Boston hoping to maintain their position at No. 4 in the East. They have won their last three, while the Bucks have dropped their last two.

Washington Wizards (38-40) @ Detroit Pistons (42-37) - 7:30 p.m. ET
The Pistons have already punched their ticket into the first round, something they haven't done since 2009. They meet a Wizards team that was vying for that bottom seed just last week, but now has little left to play for. Washington could shut down John Wall for their remaining games.

Indiana Pacers (42-36) @ Toronto Raptors (52-26) - 7:30 p.m. ET
This is a potential playoff preview between the likely No. 2 and no. 7 seeds in the East. The Pacers could be overtaken by Detroit and drop to No. 8, while the Raptors are locked in behind the conference-leading Cavaliers. Toronto just welcomed back starting small forward DeMarre Carroll, who was out 41 games after knee surgery.

Los Angeles Lakers (16-62) @ New Orleans Pelicans (45-33) - 8:00 p.m. ET
The Kobe Bryant farewell tour makes its final stop in New Orleans. The Lakers, who are dead last in the West, have lost three in a row. The Pelicans have dropped their last two.

Memphis Grizzlies (42-36) @ Dallas Mavericks (40-38) - 8:30 p.m. ET, NBATV
Both of these teams could still move down a spot in the Western Conference totem pole, but it wouldn't make much of a difference as neither can secure home-court advantage. The Mavericks, after enduring an ugly second-half stretch, are suddenly the hottest team in the West with five-straight wins.

San Antonio Spurs (65-13) @ Denver Nuggets (32-47) - 9:00 p.m. ET
The Spurs look to rebound after an uninspiring loss to the Warriors, and should be able to do so against the Nuggets unless Gregg Popovich chooses to rest his starters. Denver has lost its last three.

Los Angeles Clippers (50-28) @ Utah Jazz (39-39) - 9:00 p.m. ET
The Jazz would have to lose its last three games to endanger its spot in the postseason, but they would be wise to lock themselves in sooner rather than later. They welcome a Clippers team that appears to be peaking at the right time. L.A. has won its last three games.