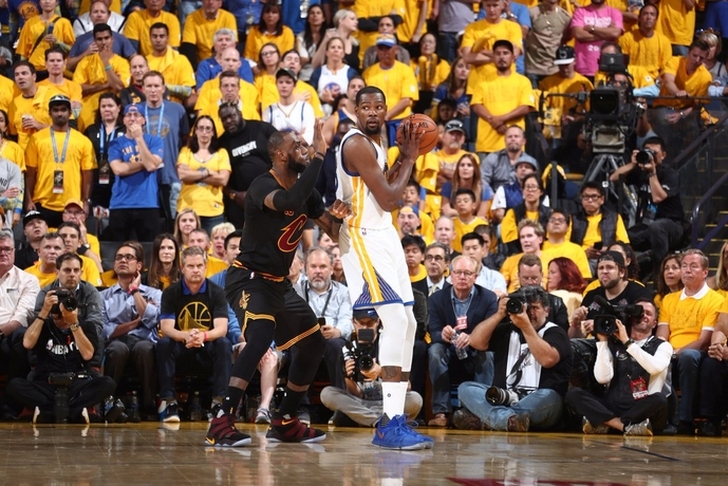 The 2017 NBA Finals only just completed, which means it's the perfect time for a way-too-early-look at the best teams for the 2017-18 NBA season. The Golden State Warriors are your 2017 NBA Finals Champions and there's no doubt the Warriors are the favorites for next year. But who has a shot at dethroning them?

Plenty can and will change between now and the start of the season, especially since the Draft and Free Agency have yet to start. Each team has their 2016 record listed and this is simply an early look how the teams stack up. With that in mind, here are the way-too-early NBA Power Rankings.

30. Brooklyn Nets (2016 record: 20-62)
Sorry, Nets fans, it's going to be a while before you're good again. They were last team last and don't have their first round pick until 2019. It's tough, and the patience of true Nets is going to approach Sainthood levels before they're good again.

29. Orlando Magic (29-53)
The Magic might be in for an even worse season in 2017. The Magic could blow things up this year and it might be a slow rebuild.

28. Phoenix Suns (24-58)
The Suns have plenty of talent, but they're still growing. Players like Devin Booker give the Suns a bright future, but Phoenix simply isn't ready to make any major moves up the standings. But if they continue to draft well and develop their young players, they'll be out of the bottom of the rankings in the near future.

27. New York Knicks (31-51)
The Knicks have Kristaps Porzingis, but they could waste his ability if they don't surround him with better talent. The "superteam" was a bust and Phil Jackson has made it clear he doesn't want Carmelo Anthony. While Anthony doesn't fit their (likely) rebuild strategy and he's not the player he once was, the Knicks won't find a player of his caliber this offseason. Assuming Melo is a goner, the Knicks seemed primed to take a step back.

26. Sacramento Kings (32-50)
Here's another rebuilding team and one that could have a very different-looking roster next year. Buddy Hield is one (hopeful) long-term piece and the Kings have two top 10 picks this year. But the rebuild will take time and the Kings seem set for another rough year.

25. Dallas Mavericks (33-49)
The Mavericks have a strong roster - aging pieces like Dirk Nowitzki, high-priced players like Harrison Barnes and whomever they take in the top 10 this year. The Mavs are stuck in no-man's land right now, not good enough to make the playoffs and not bad enough to finish near the top of the lottery. With a limited ceiling, the Mavs rank lower than their record from last year says they should.

24. Los Angeles Lakers (26-56)
Here's the first of three teams trending upwards. There's plenty of young talent for the Lakers, including De'Angelo Russell, Julius Randle and Brandon Ingram. Plus, the Lakers can get Lonzo Ball at No. 2 overall (or whomever they want). But the Lakers are likely a year away from making a real playoff push, unless they're able to land someone like Paul George.

23. Philadelphia 76ers (28-54)
The 76ers have some talented young pieces: Joel Embiid, Ben Simmons and Dario Saric to name the top three. The 76ers can also get another key piece with the No. 3 pick (or later if they trade down). Trusting the process has put the 76ers on the right path, but the health of their core is a major concern. If everyone stays healthy, a major if, the 76ers could push for a playoff spot.

21. Detroit Pistons (37-45)
The Pistons current roster setup doesn't allow for many additions unless the club wants to blow it up. With trade rumors around Andre Drummond and Reggie Jackson, that very well could be the case. If the Pistons trade away a key player, they'll likely drop down this list. This is the start of several middling Eastern Conference teams with very little separation.

20. Charlotte Hornets (36-46)
The Hornets took a step back this year, but there's still talent on the roster. Kemba Walker, Nic Batum and the rest of the roster is good enough to make it back to the playoffs next year in a down Eastern Conference. Expect them to be closer to .500 next year.

19. Miami Heat (41-41)
The Heat rallied from a terrible start, but the roster has several free agents who might not be back. Getting Chris Bosh's contract off the books will help the Heat, but they face a pivotal offseason. The Heat could jump a few spots or drop after the offseason ends.

18. Chicago Bulls (41-41)
The Bulls gave the Celtics a run in the playoffs, but that doesn't change the fact this roster isn't well constructed. There's too many guards who have issues shooting and not even spacing. That's a bad fit for a coach who wants to run a pace-and-space system. The Bulls exceeded the expectations I had for them this year, but I'm not still not buying this team any higher than this right now.

17. Indiana Pacers (42-40)
The questions around the future of Paul George will be the focal point of the Pacers' offseason. There's a chance the Pacers deal George, which would plummet them down the rankings. If they keep George through the offseason, the Pacers should make one last-ditch effort at making themselves into one of the better Eastern Conference teams.

16. New Orleans Pelicans (34-48)
Most of the NBA is heading towards small ball, so the Pelicans are zagging with a pair of bigs in DeMarcus Cousins and Anthony Davis. The Pelicans weren't great after their big trade for Boogie, but it was mid-year and they were already paying catchup. The Pelicans need more shooting around their two bigs and I'm excited to see what offseason moves they make. Keeping point guard Jrue Holiday seems like a must.

15. Denver Nuggets (40-42)
The Nuggets make the playoffs in the Eastern Conference, but they just missed out in the West. This team has plenty of talent, much of it young. Denver is also in an interesting spot, where they lack a true star despite having several starting caliber players. Denver will fight again for a playoff spot next year, but it won't be easy.

14. Atlanta Hawks (43-39)
The future of Dwight Howard is unclear, but the Hawks still have several quality players. Keeping Paul Millsap is a must, or this Hawks team could fall out of the Top 20. Head coach Mike Budenholzer has taken after his mentor Gregg Popovich in regards to getting the most out of his team. Atlanta, assuming everyone returns, remains an Eastern Conference Playoff team (in that 5-to-6 seed range).

13. Portland Trail Blazers (41-41)
With multiple first round picks, the Blazers can add another key player or two. Or, they can package a pick to shed some salary. The Blazers lack the defense to be a Top 10 team, but their offense should keep them in the Top 15. Damian Lillard and C.J. McCollum are both great, but it's fair to question if the Blazers can win enough with both. Perhaps they'll take a page out of the Warriors playbook at some point and trade one of their guards (a la Stephen Curry and Monta Ellis).

12. Milwaukee Bucks (42-40)
The Bucks are a promising young team and they seemed poised to at least leap past the Hawks this year. There's plenty of young talent, headlined by Giannis Antetokounmpo. Another guard, one who can shoot, would be ideal for the Bucks. Hopefully Jabari Parker can stay healthy, too. The Bucks aren't ready to take down the Cavs, but they are trending upwards.

11. Memphis Grizzlies (43-39)
Memphis always seems a bit underrated. They frequently compete against better teams, even when they're injured. But, with pretty much no cap space, the Memphis roster is what it is. And a core of Mike Conley, Marc Gasol and the oft-injured Chandler Parsons just isn't good enough to make a deep playoff run.

10. Oklahoma City Thunder (47-35)
The Thunder are good, with Russell Westbrook coming off an absurd, MVP-caliber season. But, Russ doesn't have enough around him on offense. The Thunder need more shooters, but the Victor Oladipo and Enes Kanter contracts make moves tricky. They'll be a playoff team next year if Westbrook is healthy, but they might not go far with the current roster.  Perhaps they'll pursue Blake Griffin this offseason.

9. Toronto Raptors (51-31)
The Raptors have settled into a bad pattern: great in the regular season, struggle in the playoffs. Kyle Lowry and Serge Ibaka are both free agents this year. If they return, this is as low as the Raptors will rank. But if one, or both, leave, Toronto is in trouble.

8. Washington Wizards (49-33)
The Wizards starting lineup is as good as any team not named the Warriors or Cavs. But their bench is a major issue, as we saw against the Celtics. John Wall is one of the best point guards in the NBA, but the Wizards need to get him some bench help. Do that and the could compete for the No. 1 seed in the Eastern Conference since the Cavs tend to put themselves on cruise control in the regular season.

7. Utah Jazz (51-31)
The major question for the Jazz is the future of Gordon Hayward. They have some of the best depth in the NBA, but losing Heyward would drop them well out of the Top 10. Bring him back and they'll again compete for a top four seed in the West.

6. Los Angeles Clippers (51-31)
The Clippers have built their roster around Chris Paul and Blake Griffin, both of whom are free agents. No team could have a worse offseason than the Clippers. If Paul and Griffin leave, the Clippers aren't close to a playoff team. If both comeback, the Clippers will fight for a top three seed.

5. Houston Rockets (55-27)
Was what we saw from the Rockets in 2017 as good as they'll get? James Harden had an MVP-caliber season and the role players did their job. But it's unclear how the Rockets can improve their roster this year. This will be a good team again, but I fear they've about reached their ceiling in the loaded Western Conference.

4. Boston Celtics (53-29)
Boston is in a great spot for the future. They've got a fantastic coach, quality players already on the roster, the No. 1 pick this year, the Nets' pick next year and the ability to add a max contract player this offseason. Of course, they still need to draft well, develop and if they can, sign someone. Gordon Hayward is an obvious target this offseason, given his ties to Stevens. Boston is already a top team in the East and they could be even better.

3. San Antonio Spurs (61-21)
Had the Spurs not lost Kawhi Leonard in Game 1, they surely win that game against the Golden State Warriors and maybe more. But the Spurs are clearly the lesser team right now. The question is, can they land someone like Chris Paul in the offseason to narrow that gap? I'll never doubt coach Gregg Popovich, but the Spurs are the No. 3 team in the NBA at best right now.

2. Cleveland Cavaliers (51-31)
Hey, they were the only team to beat the Warriors in the playoffs this year (though the Spurs came very close). But the problem for the Cavs is they're clearly a step behind the Warriors and their contracts prevent any real upgrades in free agency. So, expect to hear more trade rumors around Kevin Love this offseason.

1. Golden State Warriors (67-15)
Well, duh. No explanation required: the Warriors are the only team that can take the top spot.