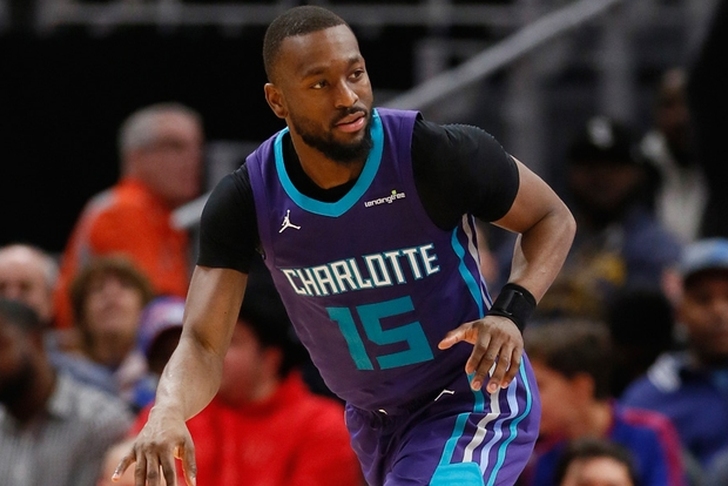 The Charlotte Hornets have officially placed All-Star point guard Kemba Walker on the trade block and are planning to deal him before the Feb. 8 trade deadline. Charlotte is currently 11th in the Eastern Conference and, with a number of bad contracts on the books, are ready to start another rebuild. Walker is one of the best bargains in the NBA - an All-Star caliber point guard making just $12 million per year and is locked up through the 2018-19 season - making him a player that will draw interest (and has) from a large number of teams. Here are the five teams that are the most likely to acquire him:

6) Cleveland Cavaliers
The Cavs don't need a point guard with Isaiah Thomas on the roster, but they also tried to take the two point guard approach this offseason when they signed Derrick Rose and traded for IT. However, given Rose's lingering injury and leave of absence from the team earlier this season, Cleveland may be done with him - especially if they can get someone like Walker.

Obviously, the Nets' first-round pick Cleveland acquired in the Kyrie Irving trade would appeal to Charlotte and get them to send Walker to the Cavs. However, that means either he or Thomas would come off the bench given the lack of size both have. Is that something either is willing to do? Or do the Cavs want to save that pick to go after someone like DeAndre Jordan? Or save it to actually draft someone for the future in case LeBron James leaves this offseason?

They have the ammo to make this trade, but with too many question marks, they're at the bottom of the list.

5) Indiana Pacers
This team has experienced surprising success this season with Victor Oladipo and Myles Turner serving as their key players, and they could go all-in for the future with this group by adding Walker. No. 18 overall pick T.J. Leaf and Indiana's first-round pick would likely be going back to Charlotte in any deal, but that pick would probably be in the late teens - and the Hornets already have a stretch big in Frank Kaminsky. The interest from Indiana is there - can they make everything else work?

4) Los Angeles Clippers
Los Angeles doesn't have the quality draft pick to offer Charlotte for Walker, but they do have some decent young players (Montrezl Harrell, Sam Dekker, Sindarius Thornwell, Jawun Evans). None of those guys are franchise-changing players, yet they are good role players and some of them could be paired with a late-first round pick. Plus, the Clippers may be willing to eat one of Charlotte's bad contracts (Marvin Williams or Michael Kidd-Gilchrist, perhaps) to help with their depth and add another veteran for the playoffs.

3) New York Knicks
Walker is a New York native and the Knicks have already expressed some semblance of interest in Walker. They drafted Frank Ntilikina with the No. 7 overall pick and are excited about him developing, yet we also know this franchise to be impatient. And, with New York in the playoff hunt along with Walker's team-friendly deal, they may decide to pull the trigger - especially in the Hornets are willing to absorb Joakim Noah's contract along with Ntilikina and a first-round pick. Charlotte would only take Noah if New York took at least one of their bad contracts (Williams, Kidd-Gilchrist, Dwight Howard, Nicolas Batum) back as well - but there is interest.

2) Phoenix Suns
The Suns went all-in on trying to acquire Kyrie Irving this summer and now have a need at point guard after sending Eric Bledsoe to the Milwaukee Bucks. They have a top-10 pick they can offer the Hornets and can even package that with a young player (Marquese Chriss, Dragan Bender, T.J. Warren). It would likely be one or the other, but the number of assets they have that would appeal to the Hornets makes them a logical fit. That said, is Walker willing to be dealt to another losing team?

1) Philadelphia 76ers
I really think the Sixers could be the dark horse in all of this. They're running Ben Simmons at point guard, but Walker has shown plenty of ability to be a scorer, averaging over 20 points per game each of the last three year). Philadelphia also has their own first-round pick and will receive the Lakers' first-round pick if it falls between picks 2-5 in the draft (it's currently projected to be No. 5). They also have good young players (T.J. McConnell, Justin Anderson, Richard Holmes) they may be willing to part with for someone of Walker's ilk.

Now, I know the question you're probably asking yourself...what about Markelle Fultz? I have two lanes of thought here.

First, we know Fultz, the No. 1 overall pick in the 2017 draft, is dealing with a lingering shoulder injury and that the team is really unhappy with him changing his shooting form in the offseason, which made him ineffective in the first four games of the season (and they believe caused the shoulder injury). Are they already at the point where they would offload him? Charlotte would absolutely accept a one-for-one swap (Fultz for Walker with nothing else involved), giving the 76ers an immediate upgrade that position and a long-term solution without having to give up their draft picks or deal with Fultz' shot problems.

Secondly, who says Walker and Fultz can't play together long-term? Fultz has the size to play two-guard, and Philadelphia could move forward with a Walker-Fultz-Robert Covington-Simmons-Joel Embiid starting five, making them an immediate contender in the East. They'd have to part with the Lakers pick (and potentially one more since that's protected) and one of the young players mentioned above, but it's an avenue they'll explore.