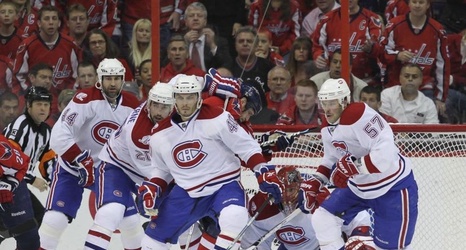 WASHINGTON - APRIL 28: (L-R) Roman Hamrlik, Ryan O'Byrne #20, Maxim Lapierre #40, Jaroslav Halak #41 and Benoit Pouliot #57 of the Montreal Canadiens defend the net against the Washington Capitals in Game Seven of the Eastern Conference Quarterfinals during the 2010 NHL Stanley Cup Playoffs at the Verizon Center on April 28, 2010 in Washington, DC. The Canadiens defeated the Capitals 2-1 to win the series. (Photo by Bruce Bennett/Getty Images)

Well, I don’t think many Montreal Canadiens fans could’ve seen this coming. Regardless, I doubt many are upset about that.

To keep things brief, I’ll just get this out of the way right now: The Canadiens have played near-perfect hockey since being down 3-1 against the Toronto Maple Leafs in Round 1.