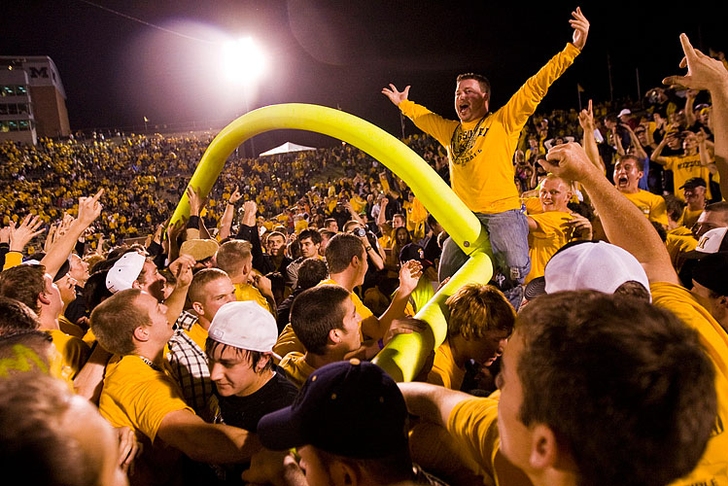 My name is Curtis and I cover the Indianapolis Colts for Chat Sports.  I will now also be covering the Missouri Tigers football team for the company as well.  The following is a piece I posted on my own blog awhile back, previewing the team.  The first game for the Tigers is Saturday, Sept 3.  Kickoff is at noon, eastern time.  They face the Miami (OH) Redhawks.  I will be one of a few writers covering the team.  We have just launched a ChatMizzou page on Facebook and Twitter so there are plenty of outlets to follow us from.  I'm looking forward to the season and covering the Tigers.  Please keep coming back to the http://www.chatsports.com/missouri-tigers page to read up on the football team.

The Tigers have put together some real consistency over the past couple of years.  They have been in six bowl games, reached double-digit victories 3 times out of the past 5 years, and just toppled #1 Oklahoma this past season.  Can they continue success with a new quarterback at the helm?

James Franklin is the new man on the block, trying to be the next in line, following three consecutive Missouri NFL quarterbacks in Brad Smith, Chase Daniel, and Blaine Gabbert.  Albeit, Brad Smith is now a receiver but hey, he still plays.  And Franklin will probably be most closely related to Smith in style of play.  He isn’t a pocket passer who is going to air it out all over the field.  His athleticism will be featured in Missouri’s offense with many options and draws.  What benefits Franklin is a solid cast around him.  The Tigers will feature as many as four running backs this season.  They are led by juniors Kendial Lawerence and De’Vion (not Devin, note the apostrophe) Moore.  Underclassmen Henry Josey and Marcus Murphy will also get some carries from time to time.  Together, they rushed for over 1,800 yards last season and only look to get better this coming year.  The receiving corps is solid but lacks a true deep threat.  T.J. Moe and Michael Egnew will highlight Missouri’s air attack and should really help out Franklin in his first year playing.  They are slot guys who are great outlets and can pick up yards after the catch.  The offensive line should improve too, only losing center Tim Barnes to graduation.

Maybe for the first time in as long as I can remember, the defense could be the more focused on unit.  Last year, they allowed 16 pts a game, sixth best in the nation.  They return a boatload of talent on the defensive line.  Yes, Aldon Smith is gone but don’t fret Tigers fans.  With the likes of Hamilton, Madison, Smith, and Resonno, the Tigers will probably have an even better pass rush.  If long-awaited recruit Sheldon Richardson can ever make it to Columbia, then you may very well have a top 10 defense and one of the best D-Lines in the nation.

A healthy linebacking group should continue to elevate the defense.  Will Ebner, senior middle linebacker, will lead a group with tremendous speed and a nack for finding the football.  The only question is in the secondary, which I’m starting to feel like is a theme with these 20s ranked teams.  Strong safety Kenji Jackson will star in a group that has more experience than you may believe even though three starters are gone.  Kip Edwards and E.J. Gaines will anchor down the corner spots.  With enough of a pass rush, the secondary shouldn’t struggle too much but may have the last say in telling us how good Missouri’s defense can really be.

The schedule won’t be easy for the Tigers in the recreated Big 12.  Now they must face everyone in the conference and that means the entire former South division.  Four of those former South teams I have ranked ahead of Missouri.  They play championship contender Oklahoma and fast-rising Texas A&M on the road.  Getting back to double-digit wins is a tall task and will take every bit of a magical offense to help make that happen.  Franklin doesn’t have a year to get comfortable.  If the Tigers are going to maintain their success, he has to shine right out of the gates.  We’ll see if he is up to the task.