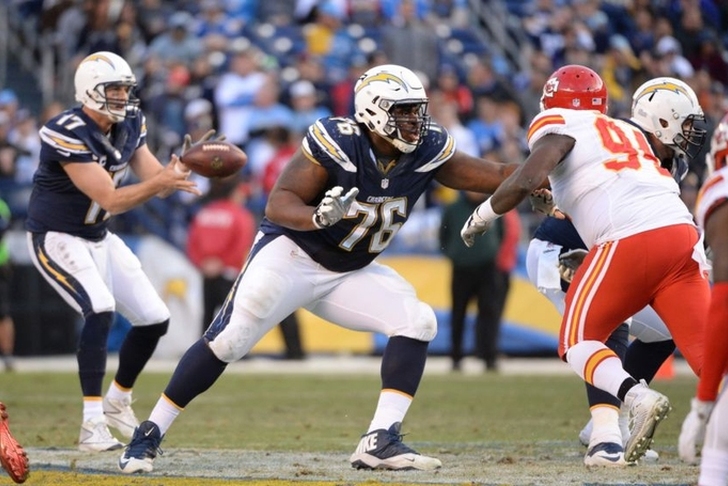 The offseason has reached a crucial point for the Minnesota Vikings. The new league year starts on Thursday, March 9, and the two-day free agency negotiating window leading  up to the start of free agency (Thursday at 4:00 pm ET) as just started. During this time, teams may negotiate all aspects of a contract with a free agent but can't finalize the deal until the new year begins. Here are the latest Vikings news & rumors you need to know:

Minnesota targeting D.J. Fluker
The Los Angeles Chargers released D.J. Fluker on Tuesday, and the Vikings - who are desperately looking to upgrade their offensive line this offseason - are one of the teams trying to land him, according to ESPN's Josina Anderson.

The Chargers had picked up Fluker’s fifth-year option, which was worth $8.821 million for 2017, but that salary was not guaranteed. Fluker, who has started every game he has played in his four-year career, can play both tackle and guard. He is one of the top offensive linemen now available on the open market.

Vikings also interested in Russell Okung
Minnesota also has their eyes on offensive tackle Russell Okung, who was recently released by the Denver Broncos, according to ESPN's Jeremy Fowler.

Teams figuring to be in mix for LT Russell Okung this week, per source - Broncos, Jets, Vikings, Chargers, Giants

Okung has also started every game he has played in since entering the league in 2010, and 2016 was the first year in which he played a full 16 games.

Adrian Peterson to the Patriots?
Former Vikings running back Adrian Peterson is reportedly interested in signing a team-friendly deal to join the Patriots to try to win a Super Bowl, according to Karen Guregian of the Boston Herald.

Would Peterson even consider taking a Patriots-friendly contract for a go at a ring?

A source close to Peterson told the Herald that since AP has already earned a ton — more than $97 million is his career — it’s certainly something he’d consider. Peterson knows how it worked out for Darrelle Revis and Chris Long. But naturally, there will be a lot of teams in the mix, including the Vikings. And, of course, the Pats would have to want to bring in an aging back with an injury history, not to mention baggage.

Historically, the Patriots haven’t paid running backs more than $2 million a year. If the Pats were truly interested, they might come off that number, but Peterson would have to be willing to leave a lot on the table considering likely offers elsewhere.

Minnesota declined their $18 million option on Peterson's contract for the 2017 season, meaning he'll officially become an unrestricted free agent when new league year starts on Thursday. Peterson has not ruled out returning to the Vikings, and he has also received interested from the Houston Texans, New York Giants, and Oakland Raiders.

Follow our Minnesota Vikings news page for all the latest Vikings rumors!