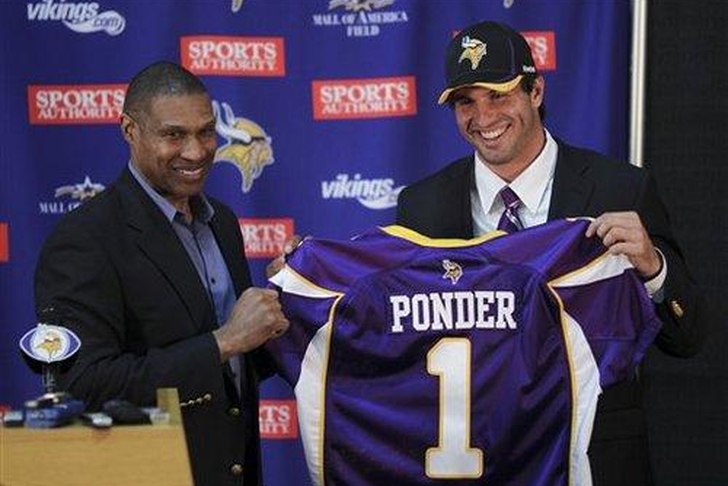 I've been a Minnesota Vikings fan since I was seven years old in 1999. I didn't have to live through the supposed agony of the four Super Bowl losses, or the baffling trade for Herschel Walker, or even the 1998 NFC Championship Game. All of that considered, I've been pretty blessed as far as Vikings fans go. I've seen two title game appearances, the explosive ability of Randy Moss and Adrian Peterson, and the best run defense in the league three years in a row. However, something's missing. In my twelve years as a fan, the team has yet to stumble upon a franchise quarterback. Oh sure, we talked ourselves into Daunte Culpepper and *gulp* Tarvaris Jackson, but neither panned out. So in April, my beloved Vikes took a chance and reached for Florida State's Christian Ponder with the 12th overall pick. After Favremageddon, it seemed best to move on. So as fans, we find ourselves once again hyping the young quarterback du jour in our minds. Can we help it though? I mean just look at this list of quarterbacks we've trotted out for slaughter over the last twelve years:

Randall Cunningham (after his 1998 magic wore off)

Daunte Culpepper (we'll get to him in a bit)

Brad Johnson (who we once pinned our postseason hopes on. Not kidding)

Tarvaris Jackson (another one we'll discuss in a bit)

Joe Webb (who I love, just not as a quarterback)

Daunte was supposed to lead the Vikings to the promised land. They drafted him eleventh overall in 1999, and after sitting on the bench for a year, he took the reins and found immediate success. He led the team to an NFC Central title and a spot in the NFC Title game. He made the Pro Bowl, as well as the cover of Sports Illustrated and Madden 2002. Finally, it seemed as though the Vikes had their long-term answer. However, the rest of his time in Minnesota was up-and-down. His next two seasons were decidedly mediocre, seeing him fumble and throw interceptions as the Vikings collapsed to an 11-21 record during that time. In 2003, he made the Pro Bowl, and followed that up with one of the greatest seasons in NFL history in 2004. He threw for 39 touchdowns and only 11 interceptions, and broke Dan Marino's record for most total yards by a quarterback in a single season. He would've won MVP had Peyton Manning not thrown 49 touchdowns that same year. Unfortunately, the next year would be an utter disaster. Two games in, he had turned the ball over ten times and had not thrown a touchdown. His season was mercifully ended in week 7 by a low tackle and a severe knee injury. His career with the Vikings was over at that point. He whined about his contract and forced a trade to Miami. He faded into obscurity after brief stints in Oakland and Detroit, never being able to match the immense talent he displayed in flashes. Apparently, he now plays for the Sacramento Mountain Lions in something called the UFL.

Daunte's career really exemplifies what it's like to be a Vikings fan. There are flashes of brilliance, and occasionally it all comes together to really make us fans believe that this is our year; but then it crumbles (and occasionally explodes) and we start over. He left us with some great memories (the 2000 and 2004 seasons, his 'gettin my roll on!' celebration, running over defenders on his way into the end zone), but ultimately, his career is more a story of squandered potential than success.

The next guy we talked ourselves into was Tarvaris Jackson. His career is best summed up in three pictures:

He'll be a free agent when the lockout ends, and he's not expected to come back.

So now we turn our expectations to Christian Ponder. So far, he's done two things right: he isn't Brett Favre, and he isn't Tarvaris Jackson. This is a veteran team whose window for contention is running out (to be perfectly honest, it's very possible that it already has). As such, Ponder has to step in immediately and play well; not great, just well enough to win. It isn't fair to him, but that's just the situation he was drafted into. Some say he has the potential to be a mobile Chad Pennington. I'm not so sure that wins Super Bowls, but for now, I (along with every other Vikings fan) is hitching their wagon to him.