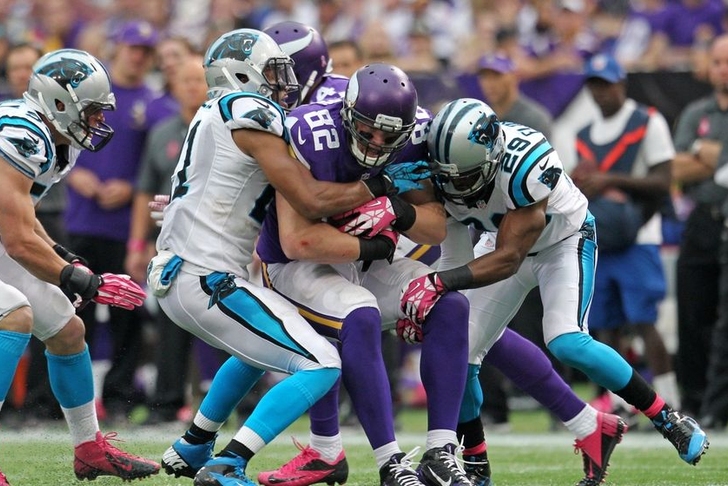 The Vikings effectively iced this one with an 11-play, 80-yard drive late in the first half that ended with a 17-yard touchdown pass from Bridgewater to Greg Jennings. The play put Minnesota up 28-6, and they were able to go on cruise control from there.

Linebacker Chad Greenway had a strong game, but we have to hand it to Teddy Bridgewater. Bridgewater went 16/21 for 138 yards, two touchdowns and no interceptions. The Vikings didn't give Bridgewater too much to do, and he was excellent in their limited game plan, finding his targets and making virtually no mistakes. Minnesota's special teams unit (two blocked punts returned for TDs) deserves just as much credit as Bridgewater, though.

Linebacker Luke Kuechly continues to excel (9 tackles, 2 sacks), but he can't do it on his own. The rest of Carolina's defense has regressed, and with the offense struggling, things are looking grim for the Panthers.

Carolina outgained the Vikings 348 to 210 and had almost twice as many first downs (23 to 12), but Minnesota's efficiency and special teams success meant it didn't matter.

Carolina has now lost six straight, and will try to end that skid on the road against the New Orleans Saints. The 5-7 Vikings, still not mathematically eliminated from the playoff hunt, will host the New York Jets.