49ers vs. Vikings Preview and Prediction 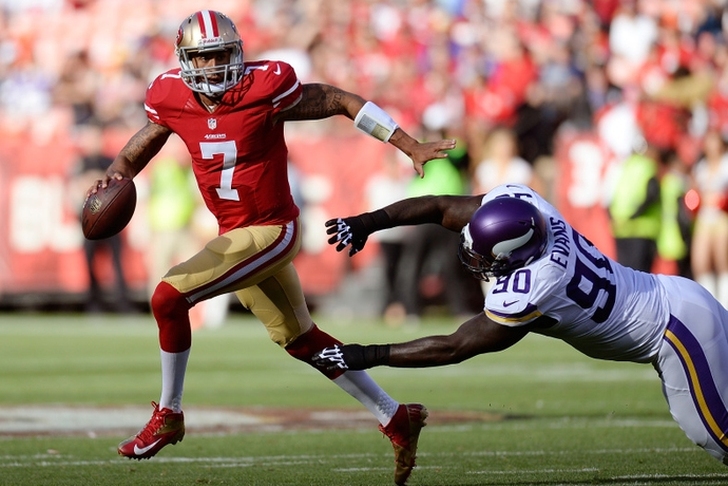 The second of two Monday Night Football games features the Minnesota Vikings and the San Francisco 49ers. Both teams missed the playoffs last season, but only one team underwent major changes. The 49ers lost several key players and have a new head coach in Jim Tomsula. The Vikings didn't make many changes, but did add Mike Wallace and get Adrian Peterson back. Which team will start their season off right with a win? Here's our game preview and prediction.

Having lost so much on both sides of the ball, not much is expected of the 49ers this season. The 49ers' offensive plan is to run the ball early and often with Carlos Hyde and Colin Kaepernick, setting up the play action for Kaepernick and Torrey Smith. The defense is down several starters and the secondary looks shaky at best, but the return of NaVorro Bowman will provide a needed boost.

The Vikings are a team on the rise. Despite injuries to the offensive line, the Peterson could be in for a big season. Teddy Bridgewater was by far the best rookie QB last season and should be even better this year. He never should have slipped to the end of the first round in the NFL Draft. The defense improved last season under head coach Mike Zimmer. The Vikings have a difficult path in the NFC North, but they'll be a tough team to beat this season.

What To Watch For: Teddy Bridgewater vs. 49ers' Secondary

The 49ers' secondary doesn't look great this season and they'll likely start either Kenneth Acker or Keith Reaser at one corner. Both players are inexperienced and might as well be considered rookies. Bridgewater will likely pick on them early and often. With Peterson in the backfield, the 49ers will have to commit to stopping the run. That will open up the passing attack for the Vikings.

Playing at home and in new black alternate jerseys will give the 49ers a boost, as will the "us against the world" mentality the team should have already. However, it's not enough to stop the Vikings offense. Minnesota leans on Adrian Peterson early and then Bridgewater carves up the 49ers' secondary with play-action passes.