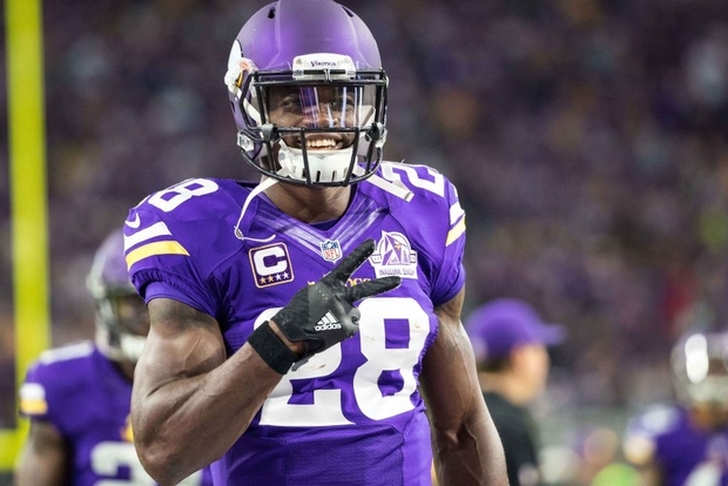 Most of you probably clicked on this because you had a mild heart attack seeing Adrian Peterson in a Minnesota Vikings uniform. Sorry to say I don't think this will be a likely signing. Can you even imagine if it were to happen though?

If you think there is even a slight chance please let me know on twitter or if you think I missed players who the Vikings might be interested in putting on their 52 man roster hit me up on twitter @MitchellRenz365.

Time to get serious, the players below are the most likely targets for the Vikings to add to their running back depth chart behind new starters Latavius Murray and Jerick McKinnon. I see the Vikings signing a veteran running back and just filling up the depth chart for one year until Cook is healthy enough to come back next year.

1.) James Starks
Starks played for the Green Bay Packers for seven years and it isn't uncommon to see veteran running backs get signed to teams they played against in their division. Starks averaged only 2.3 YPC last season but the Vikings have seen him play numerous times and it wouldn't surprise me if they contacted him.

2.) DeAngelo Williams
I don't think this is a bold statement but Williams would be the best running back on the Vikings if he signed. Williams played for the Carolina Panthers for most of his career and played for the Pittsburgh Steelers the last two seasons. Williams was productive when LeVeon Bell was out for the Steelers the last two seasons and I think he still has some left in the tank. Or at least more than Murray and McKinnon.

3.) Ryan Mathews
Mathews played for the Philadelphia Eagles the last two years and played for the Chargers his first five seasons. He has been injury prone for most of his career but when healthy he has been productive. He has played in all 16 games only once in his career and has only one season with a YPC under 4.0. Last season Mathews had a career high in touchdowns with eight.