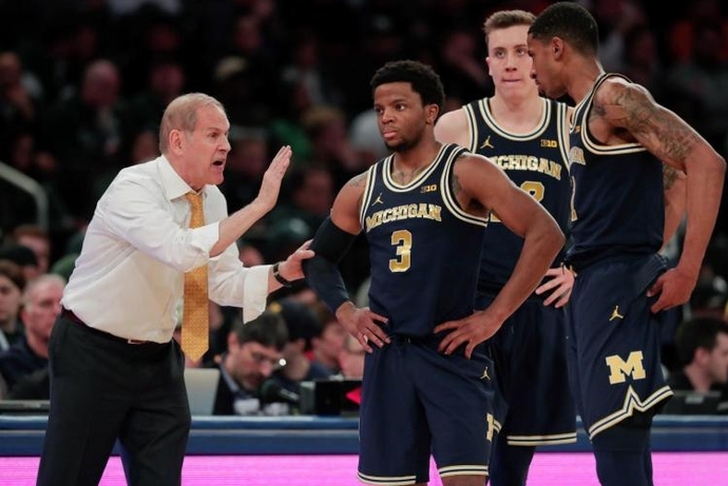 The Michigan Wolverines are the third-best seed remaining in the Final Four behind one-seeds Villanova and Kansas, but they have the second-best title odds.

According to Bovada, Michigan has 5/2 odds to win the national championship, trailing only Villanova at 1/1. Kansas has 13/4 odds while Michigan's opponent Loyola Chicago has 9/1 odds.

The Wolverines are currently five-point favorites in their game against the Ramblers.

Bovada also has Michigan included in four of the top five most likely title games outcomes:

Villanova beating Loyola is the other title game outcome that ranks in the top five.

Michigan is peaking at the right time under head coach John Beilein, as they've won 13 games in a row, which is the second-longest active streak in the country (one behind Loyola Chicago). The Wolverines have also been rather dominant during the streak, winning eight of those games by double digits.

Beilein credit's the team's culture for their success late in the season.

"I think last year's team was special as well and the culture was set over the last couple of years," Beilein said. "These guys can tell you, we've had a complete change over in our roster. We had some great opportunities for a lot of kids to go pro early, five over two years. We may have taken some steps back but it started over again with guys. With Muhammad-Ali, who was like another version of the Zach Novaks and the Stu Douglasses. Jordan Morgan, who we got this thing started with. They made us a team of substance and that's really important."

Michigan will take on Loyola Chicago in the first Final Four matchup in San Antonio on Saturday. Tip-off is set for 6:09 p.m. ET and will be televised by TBS.

NEXT READ: Here Are 5 Reasons Why Michigan Can Win The National Championship