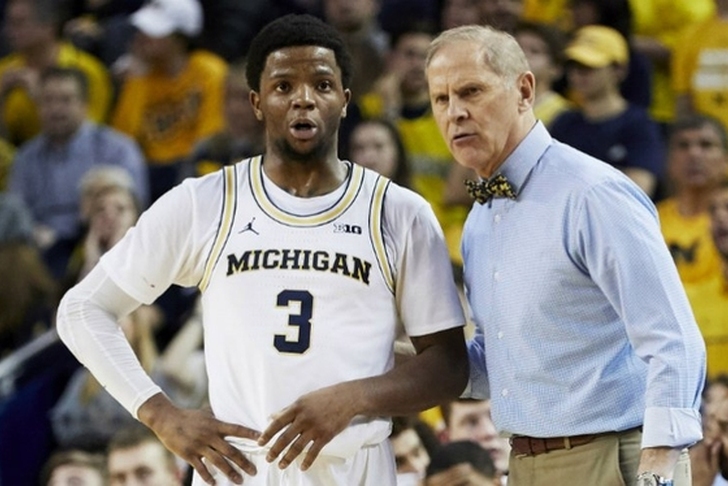 The Michigan Wolverines have a national fan base and have thousands of fans ready to cheer them on in San Antonio in the Final Four, but the players are not expecting a warm welcome when they step onto the court on Saturday night.

With them facing the tournament's Cinderella story in Loyola-Chicago, Michigan knows that a majority of the fans in attendance will be rooting for the Ramblers to beat them.

"It's definitely come up, it's a mindset," Michigan point guard Zavier Simpson said. "But we just want to stay inside the box. That's what's key right now. We've been doing that. We've been winning. We want to stick with that."

Loyola has been the biggest story of the tournament so far, becoming just the fourth No. 11 seed to ever make the Final Four while winning three of their four games on last-second shots. Of course, 98-year-old team chaplain Sister Jean Dolores-Schmidt has become the single biggest star of the tournament.

RELATED: #3 Michigan vs. #11 Loyola-Chicago Preview & Prediction: Who Will Advance To The Title Game?

Each of the four schools received an equal allotment of tickets Final Four along with the tickets that are on sale to the general public, so while the Kansas and Villanova fans will likely be cheering for the underdog in Loyola, Michigan head coach John Beilein said he's not worried about the environment.

"We probably had 20 people at those (true road) games that had Michigan stuff on, maybe more. Maybe 50 people with Michigan gear on," Beilein said. "We're going to have thousands and thousands (on Saturday). Michigan will be here strong (this week). And I don't think that will bother us. I think that this is going to be a great basketball game with two teams that really have moments where they play really good basketball."

It should be noted that during Michigan's current 13-game win streak, 11 of those victories have come away from home on either a neutral court or in a true road game.

Catch up on all the latest college basketball news & rumors in the best sports app available - the Chat Sports App!

Beilein also isn't taking the Ramblers themselves lightly. Loyola has been referred to as "Michigan's little brother" or "Michigan-lite" because of their similar style of play in a mid-major conference, and those similarities have Beilein's attention.

“I think there are a lot,” he said. “[Loyola head coach] Porter [Moser]'s worked for a few coaches and he's been a head coach at Loyola and before, so I see the Rick Majerus influence. I see just tremendous individual defenders, so they don't have to give a lot of help, and we would like to think that we're similar in that way. I think we play the game efficiently at both ends of the floor, but both of us start with our defense. We really pride ourselves in playing good ‘D.’ But they're a lot like us. If you watch Mo Wagner, he'd have a monster of a game and then somebody else does it.

“They're all hard games. They’ve got one guy that can get to the foul line or shoot it, and you've got to key on him. He sees everything … that's hard. But you need five good defenders on the floor to guard these guys, because they'll find a weak guy.”

Beilein also pointed to Loyola's unselfishness and team play as the biggest reason behind their Cinderella run.

Michigan and Loyola-Chicago will face off in the first Final Four matchup on Saturday night. Tip-off is set for 6:09 p.m. ET and will be televised by TBS.

NEXT READ: Why Michigan Can Win The National Championship