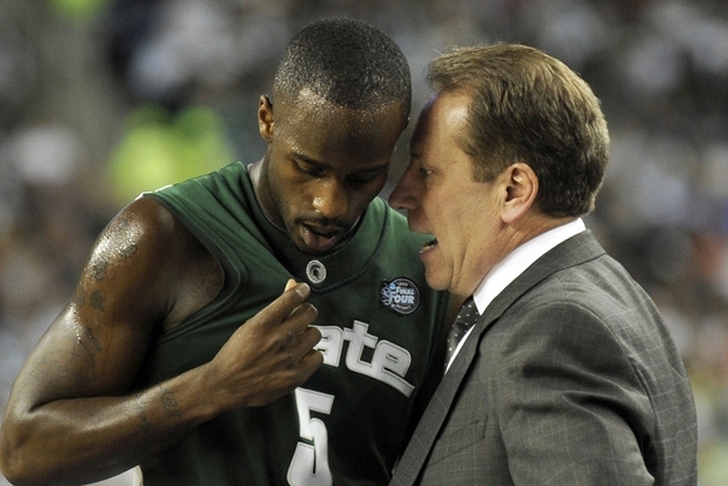 Former Michigan State Spartans basketball player and assistant coach Travis Walton, who was involved in two sexual assault incidents mentioned in Outside the Lines' explosive report while on MSU's staff, was living in head coach Tom Izzo's basement at the time of the alleged incidents, according to a profile of Walton recently published LimaOhio.com.

Walton took a shot at playing at the next level, joining the Detroit Piston’s summer league team, but was not offered a contract. Faced with a decision about what to do next, it was Coach Izzo who stepped in and made Travis an offer he couldn’t refuse. “I was nine hours short of graduation,” Walton says. “Coach Izzo encouraged me to return to MSU, work with him as a student assistant coach, and earn my degree.”

Walton moved into Izzo’s basement and spent the year completing his degree, learning the art of coaching and staying in shape by working out with the team. It was an easy transition for Travis.

Walton was a member of the Michigan State basketball team from 2005-2009, winning Big Ten Defensive Player of the Year in 2009 while leading the Spartans to the national championship game, before joining Izzo's staff as a graduate assistant for the 2009-2010 season.

In 2010, the time when Walton was living in Izzo's basement, OTL reported that Walton was involved in two incidents of sexual assault - including an allegation of rape - yet was allowed to remain on staff throughout the duration of the season.

Outside the Lines also has obtained never-before-publicized reports of sexual or violent incidents involving members of Izzo's storied basketball program, including one report made against a former undergraduate student-assistant coach who was allowed to continue coaching after he had been criminally charged for punching a female MSU student in the face at a bar in 2010. A few months later, after the Spartans qualified for the 2010 Final Four, the same assistant coach was accused of sexually assaulting a different female student.

Within that month, Walton's name would come up in another allegation involving a female MSU student. He and two basketball players -- who played for him in the NCAA tournament -- were named in a sexual assault report made by the woman and her parents to the athletic department, according to a university document obtained by Outside the Lines. The woman did not report the incident to police but told counselors and MSU athletic director Mark Hollis that she had been raped off campus by Walton and the two players.

Several weeks later, the woman and her mother met with Hollis and associate athletic director Alan Haller, who told them they had spoken with the coaching staff and were told the incident had been discussed with "the basketball team," according to the letter.

"None of the players were reprimanded in any way," the letter states. "The victim and her mother were told that there's not much that can be done to the players (except to increase awareness of sexual assault and 'intensify' the training program)."

"I don't recall anything from that," Walton told Outside the Lines in response to the allegations against him.

Walton left the Michigan State program after the season - OTL reported that he was fired - and spent the next three seasons playing professional basketball overseas. However, when Izzo was asked by a reporter following Michigan State's win over Maryland on Sunday, he said he doesn't remember why Walton left the program.

Stay up-to-date on this story in the best sports app available - the Chat Sports App!

It's very unlikely that Izzo doesn't know why he left or was unaware of the incidents involving Walton considering we now know that Walton was living with him and that Izzo had taken a huge interest in him and his future.

Walton has been an assistant coach in the NBA G-League since 2014 and has spent this season working for the Agua Caliente Clippers, the Los Angeles Clippers' affiliate. He has been placed on leave due to the allegations.