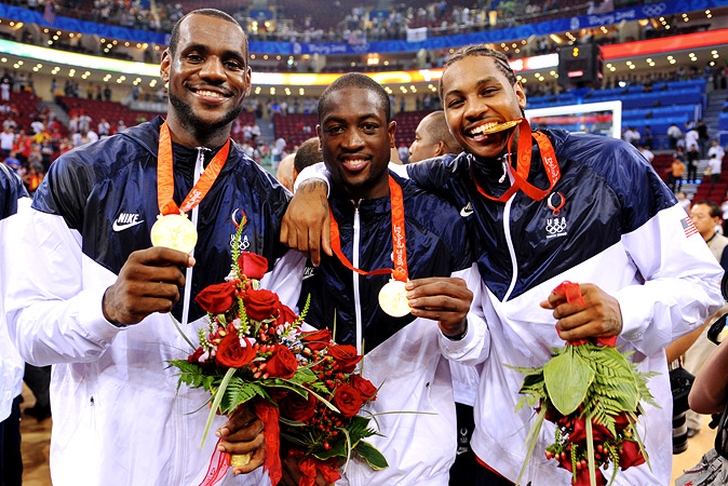 Carmelo Anthony to stay with the Knicks? Makes sense.

Carmelo Anthony to sign with the Mavericks or Bulls? Plausible and worth considering.

Per Marc Stein and Brian Windhorst of ESPN.com, the Miami Heat are preparing to make a run at Melo in free agency if Anthony decides to opt out of his current contract with the Knicks before June 23rd.

As you might expect, Twitter is going nuts over the possibility of a Big Four on the shores of South Beach:

If Carmelo goes to the Heat, I will literally send an e-mail to the NBA every single day recapping how Chris Paul couldn't go to LAL.

Man, if the Heat have their current big 3 AND Melo, I might just cry. That's just an insanely unfair level of talent. — Kevin Ferrigan (@NBAcouchside) June 12, 2014

If melo comes to the heat and we keep the big 3, I might not even be a heat fan anymore. That's illegal lol

These Melo rumors remind me of the words of Marlo Stanfield. "You want it to be one way but it's not. It's the other way." #TheWire — Brian Geltzeiler (@hoopscritic) June 12, 2014

One last tweet about Melo: I kind of want him to come just so every other fan base's heads explode

The best thing about Melo + the Big 3 would be the proverbial middlefinger Riley'd be giving the owners who tried to break up the 3 via CBA. — Jordan⏙ (@jordub) June 12, 2014

If Melo goes to the Heat the NBA's integrity will die a quick painful death. — King Thirst (@nosavageshere) June 12, 2014

Y'all really think the NBA cares if y'all are "done watching the NBA" if Melo goes to the Heat? pic.twitter.com/364TJGKwQn

Melo to the Heat would be the worst thing to ever happen to the NBA. It would KILL the league

If Melo goes to the Heat, 2K15 needs to make the Heat an unlockable team that you can achieve by beating the game. It's just not fair.

Me if Melo joins Miami... pic.twitter.com/8wKv31gbft

This is what Twitter is like with the story still just a rumor. Imagine what will happen if he actually signs.

Fun days ahead in the 2014 NBA offseason.

Have something to get off your chest about this Melo-to-Miami rumors? Be sure to mention @ChatSports in a tweet for a chance to get your thoughts published!