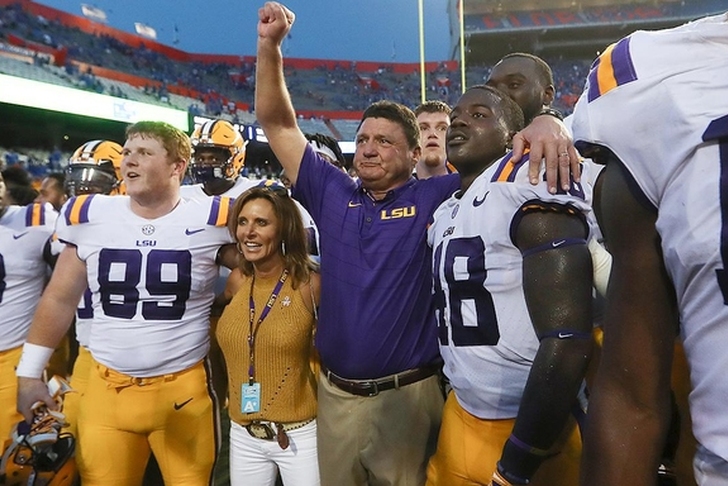 The LSU Tigers finished the season with a 9-4 record, rebounding from a slow start to go 6-2 in SEC play before falling short against Notre Dame in the Citrus Bowl. With quarterback Danny Etling graduating, LSU will have to find a new starting quarterback - a position that has plagued them and kept them from competing for College Football Playoff berths. However, with another top recruiting class in tow, the Tigers are expected to be one of the SEC's best teams again in 2018. Here's how they rank in the way-too-early top 25 polls published by major publications:

Chat Sports
Ranking: 16th
Breakdown: "Speaking of consistent quarterback play, LSU hasn't gotten any in a while and will have an open competition to replace Danny Etling, the starter for the past two years. The Tigers also need to find a way to replace Derrius Guice in the backfield. We assume they will - and will have a quality defense to boot - because of their recent recruiting classes, but time will tell."

USA Today
Ranking: 19th
Breakdown: "This is a top-10 team in pure talent, as is always the case. Whether this current coaching staff can get the Tigers into that class remains up for debate. Another change at offensive coordinator doesn’t breed confidence in that unit’s potential."

ESPN
Ranking: 23rd
Breakdown: "The Tigers were up and down in coach Ed Orgeron's first season, beating Auburn and falling to Mississippi State (by 30 points), Troy (at home) and Notre Dame (in the Citrus Bowl). LSU's issues in 2017 were the same as they were under former coach Les Miles: The Tigers struggled to pass the ball and score. It won't be any easier in 2018, with Etling departing and junior tailback Derrius Guice probably turning pro.

Orgeron made a change at offensive coordinator, parting ways with Matt Canada after one season, and Orgeron might turn to tight ends coach Steve Ensminger to be his OC in 2018. At least LSU secured defensive coordinator Dave Aranda, who received a four-year, $10 million contract, the highest ever for an FBS assistant, after Texas A&M tried to hire him away.

The Tigers will play a nonconference game against Miami in Arlington, Texas, next season, along with road games at Auburn, Florida and Texas A&M."

Sporting News
Ranking: 13th
Breakdown: "Ed Orgeron kept the Tigers moving in the right direction in 2017, and the quarterback competition between Myles Brennan and Lowell Narcisse will be the focus of the offseason. The Tigers play Miami at Jerry World in the opener and have crossover games against Florida and Georgia in consecutive weeks. We'll know enough about this team before Alabama comes to Baton Rouge on Nov. 3."

CBS
Ranking: 18th
Breakdown: "With the world's first (college) .5 million offensive coordinator, familiar pressure returns to Baton Rouge. Coach O did a nice job of rescuing the season after the Troy loss. He gets Alabama and Georgia at home. But let's get serious, for that money Dave Aranda better develop a Heisman quarterback and score 45 a game."

Athlon Sports
Ranking: 18th
Breakdown: "Ed Orgeron completed his first full season at the helm in Baton Rouge with a 9-4 mark. LSU had its share of ups and downs in 2017, which included a home loss to Troy, a bowl defeat to Notre Dame but also resulted in a 27-23 win over Auburn and a 6-2 mark in league play. But Orgeron and this team enter 2018 with some significant question marks to address. Most importantly, who will be the offensive coordinator? And regardless of who calls the plays, this offense will have a new starting quarterback after Danny Etling expired his eligibility, and running back Derrius Guice could leave early for the NFL. The receiving corps is a question mark after DJ Chark (35 catches) expired his eligibility but should get a boost with Texas Tech transfer Jonathan Giles. Assuming center Will Clapp and tackle Toby Weathersby return, the line will become a strength for the offense next fall. While the offense is unsettled, LSU will be among the best in the SEC on defense. Cornerback Greedy Williams is a rising star in the secondary, and linebacker Devin White should challenge for All-America honors. The Tigers are losing a couple of key seniors in the trenches, but Texas Tech transfer Breiden Fehoko will provide immediate help. LSU’s schedule is tough, starting with a neutral site game against Miami in Week 1, followed by road dates against Auburn and Florida before November. The Tigers also host Georgia and Alabama next fall."

Yahoo Sports
Ranking: 18th
Breakdown: "LSU is going to have quite a bit of production to replace in 2018, especially if RB Derrius Guice declares for the NFL as expected, but a lot of underclassmen saw significant action in Ed Orgeron’s first year as head coach. The impending quarterback competition between Myles Brennan and Lowell Narcisse will get the attention, but LSU’s defense is what could carry it through the SEC West. The schedule won’t be easy, however, with a neutral site game against Miami and a trip to Auburn in the month of September."

Sports Illustrated
Ranking: 14th
Breakdown: "The Tigers were up and down in 2017, but Ed Orgeron won’t be lacking for talent as he continues to mold the team in his image, for better or worse."