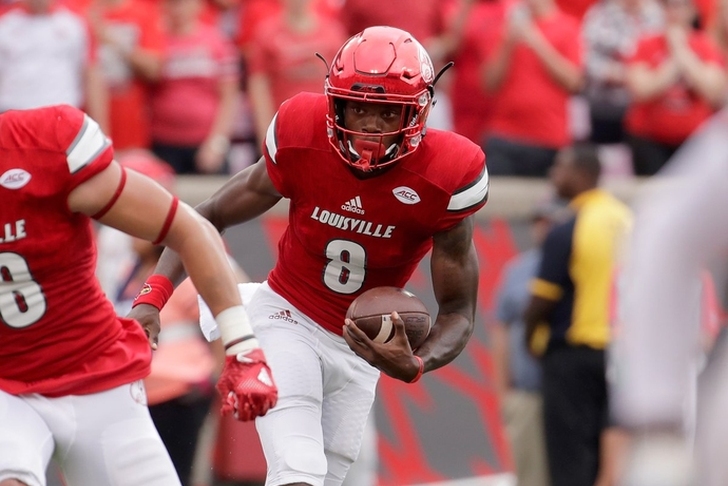 The ACC Atlantic Division has been a two team race between the Clemson Tigers and Florida State Seminoles since 2009. Now, the road to the conference championship runs through the Louisville Cardinals.

Quarterback Lamar Jackson cemented himself as the Heisman frontrunner in this game, accounting for 362 total yards (216 passing, 146 rushing) and five total touchdowns (one pass, four rush) to lead the #10 Cardinals to the impressive 63-20 win over the #2 Seminoles.

Louisville came out of the gates on fire, as two of their first three drives ended in touchdown runs by Jackson. Florida State managed to claw back into it, cutting the lead to 14-10 thanks to a 20-yard TD pass from quarterback Deondre Francois to Auden Tate, but then Louisville turned this into a blowout - largely thanks to the play of Jackson:

The Seminoles had won their last eight regular season games when trailing at halftime, but any thoughts of a comeback were quickly put to rest. After FSU's first drive of the first quarter, Louisville's Jaire Alexander returned the punt 69 yards for another touchdown:

Louisville reeled off three more touchdowns after that, capping a 49-0 run to make it 63-10. Florida State added another touchdown and field goal late in the game to make it 63-20.

On top of Jackson's heroics, running back Brandon Radcliffe had a huge game for Louisville, rushing for 118 yards and touchdown on 14 carries. Fullback Jeremy Smith also had two rushing touchdowns.

Follow our Louisville Cardinals news page for all the latest Louisville football news!