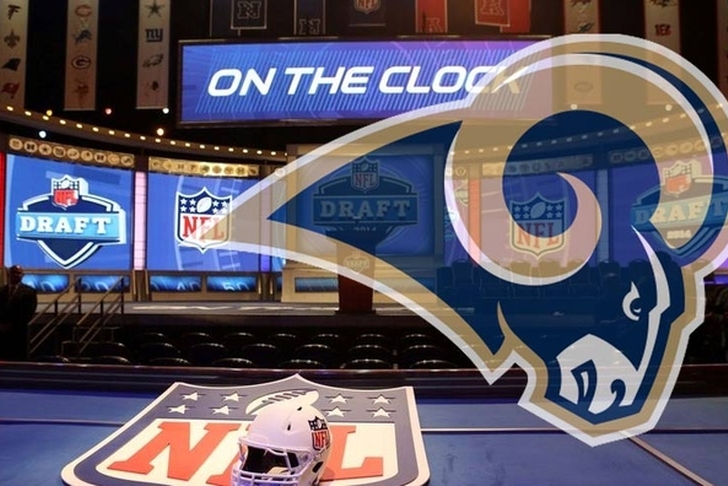 The 2018 NFL Draft is in the books, so check out the Los Angeles Rams' 2018 NFL Draft class and the grades given to them by major publications. Many felt that the Rams did not have a solid draft overall, while others think they did pretty good. It's hard to say they had a great draft since they didn't have a first-round pick Here's how they fared in the draft grades given by major publications:

USA Today
Grade: C
Breakdown:
"Very hard to peg this. GM Les Snead gave up his first-round pick for WR Brandin Cooks, who's currently under contract for one more year. Snead used his second-rounder last year in a trade for WR Sammy Watkins, and that turned out to be a rental. In terms of players Snead actually drafted, fifth rounders Micah Kiser, an inside linebacker, and Ogbonnia Okoronkwo, an edge player, may have the best chance to play now."

ESPN
Grade: B-
Breakdown:
"It's tough to grade this Rams draft because they had only one pick on the first two days. Their first-round pick (No. 23) is essentially wide receiver Brandin Cooks, who is already a productive NFL player but will be looking at a massive contract next offseason. If Rams GM Les Snead and coach Sean McVay gave up a first-rounder for Cooks, they better be prepared to pay up to keep him, or else that's a bad trade. Still, consider that Cooks is just 24 years old, and no wide receivers were taken ahead of that No. 23 slot. It's certainly possible that they got the best wide receiver available. They gave up this year's second-round pick (No. 56) in the trade for Sammy Watkins, whom they lost in free agency. That trade looks worse than the Cooks addition. The Rams spent heavily to try to upgrade their receiving corps, but there's better value in Round 2 of the draft. Receivers James Washington and D.J. Chark were still on the board at that pick.

We also have to factor in the additions of cornerbacks Aqib Talib and Marcus Peters, who cost late picks in this draft. They're good players -- for 2018, at least.

Joe Noteboom (pick 89), who started 40 games at TCU, at both left and right tackle, is a good developmental player for a team with an aging offensive line -- left tackle Andrew Whitworth turns 37 during the season. Brian Allen (111) gives them center depth, where John Sullivan turns 33 before Week 1. I like Obo Okoronkwo (160), and Wade Phillips is going to set him loose off the edge in his 3-4. Micah Kiser (147) and Justin Lawler (244) were two more who stood out on a busy Day 3.

Snead has clearly placed an emphasis on finding underrated talent in Rounds 4-7, and he could have some finds here. I just don't know how many of them will be able to contribute as rookies."

Bleacher Report
Grade: A
Breakdown:
"The Los Angeles Rams made a pointed effort to address each of their major needs. They threw most of their assets into the trenches, with the lone skill-position selection being running back John Kelly. The former Tennessee ball-carrier can earn his way into a backup job behind Todd Gurley, which is fantastic return on a sixth-round pick.

Two of their fifth-round picks could start on defense, as both Micah Kiser and Ogbonnia Okoronkwo are pro-ready players entering positions needing talent. Both are plus athletes who have compensated well for their lack of ideal size. But defensive coordinator Wade Phillips will get the most out of them in 2018 in significant roles.

The rest of their draft added vital depth to the offensive and defensive lines. With multiple free-agents along both next year, they must develop from within to replace departing talent."

SB Nation
Grade: B+
Breakdown:
"The Rams didn’t have a pick until No. 89 overall, so it’s hard to get too excited about their draft. Offensive tackle Joe Noteboom is a good developmental offensive tackle who has the traits to become a starter. How fast he gets there may depend on how many more years Andrew Whitworth plays. Center Brian Allen was a decent, but still unexciting pick, in the fourth round.

Later in the fourth round, the Rams got another depth piece in defensive end John Franklin-Myers. He’s a good power end who will help against the run game. Linebacker Micah Kiser, taken 147th overall, was actually my favorite pick the Rams made. He’s a smart player who lead the ACC in tackles the past three seasons. Ogbonnia Okoronkwo was a sneaky good pick in the fifth round. He’s a situational pass rusher, but a good one.

The Rams had four picks in the sixth round, and the best one was Tennessee running back John Kelly. He’s obviously not going to overtake Todd Gurley, but he’s similar in many ways."

​Yahoo Sports
Grade: A-
Breakdown:
"The Rams’ draft class is basically Brandin Cooks, Marcus Peters and Aqib Talib. Los Angeles didn’t have a pick in the first two rounds due to trades. And the Rams did fine finding lower-cost offensive line and edge rush help with what they had. One interesting pick is Ogbonnia Okoronkwo, who was an outstanding edge rusher for Oklahoma and fell to the fifth round. The same can be said for Micah Kiser, an inside linebacker who was a tackling machine at Virginia and came in the fifth round. John Kelly is the type of late-round running back who could return a lot of value, and the Rams need someone behind Todd Gurley. While trading picks for veterans in a salary-cap league has its downside, the Rams aren’t complaining."

Sports Illustrated
Grade: C+
Breakdown:
"They entered the draft with major needs at defensive end and, because of Alec Ogletree’s trade to the Giants, linebacker. But short on picks after trading for Brandin Cooks and Marcus Peters this year, the Rams didn’t address those areas until they drafted defensive end John Franklin (who may not be a pure edge rusher anyway) late in the fourth round and Ogbonnia Okoronkwo in the fifth round. Normally, that’d be grounds for a reprimanding, but drafting offensive line with their first two picks makes sense for this reason: Three O-linemen—Rob Havenstein, Jamon Brown and Rodger Saffold—are in contract years, and the other two—Andrew Whitworth and John Sullivan—are feeling their age. Personnel changes up front are looming in 2019, and all those fancy L.A. skill position players mean little without an O-line that allows the offense to function."