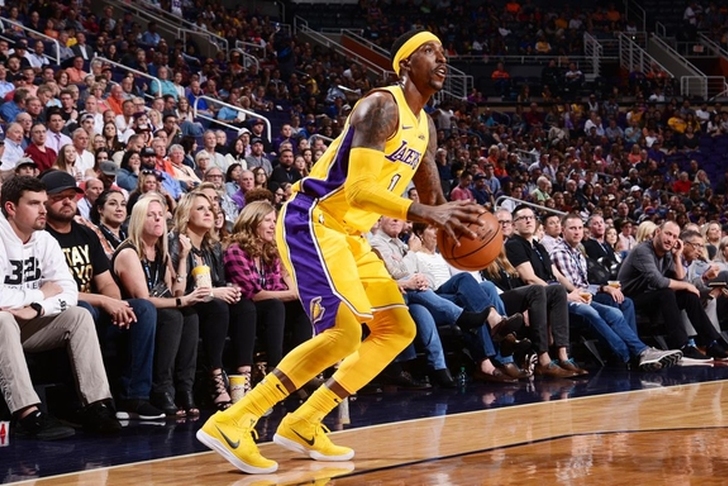 The Los Angeles Lakers have been trying to maximize their cap space to make a run at two superstars in the coming offseason, and in order to do that, they are looking to offload some contracts in order to do that. As such, they have placed several players on the trade block that are garnering interest from other teams around the league. Here are the latest Lakers trade rumors you need to know:

One of that ilk who has piqued New York’s interest is Lakers forward Kentavious Caldwell-Pope, who will be an unrestricted free agent in the summer. Caldwell-Pope certainly fits the ideal at just 24 years old with potential as an elite perimeter defender. He does carry some baggage, however, after serving a jail sentence this season for violating probation.

Caldwell-Pope is averaging 13.7 points and 4.8 rebounds per game so far this season.

Latest on Julius Randle & Jordan Clarkson
While Los Angeles has been shopping both Julius Randle and Jordan Clarkson since the offseason, the recent good play of both has improved their chances of being traded - and also cause the front office to reconsidering keeping them around long-term, according to Donny McHenry of Lake Show Life.

Both cases will have the Lakers’ management weighing their options in the next two weeks. On one hand, Clarkson and Randle’s improved play makes them attractive trade pieces to get Deng’s contract off the books. On the other hand, their improved play has to make the Lakers wonder about what their ceilings are, talent-wise.

Lakers in no rush to make a trade
Despite the fact that the Lakers have been and continue to be surveying the trade market as much as anyone, that doesn't mean they're desperate to make trades. General manager Rob Pelinka said LA will only pull the trigger on deals that help improve their championship outlook.

“I don’t know if this is the perfect metaphor but maybe a nod back to Dr. Buss, who we all know loved to play cards," Pelinka said. "The trade deadline, you almost have 30 GMs sitting around a big card table and they all have their deck of cards. What you’re trying to do as a player is analyze the other 29 players. What may they have, what may they move, what may be their next move in this card game.

“Sometimes two players across the table do a trade and reshuffle cards, that changes the scenarios you’re looking at. So, right now, I think everyone is assessing the other 29 teams and what they might do. Usually you see in that last week is when most of the major moves are made. And again, our goal is singular. It’s climbing up the Larry O’Brien trophy mountain and getting to the top. Along the way, we have to show improvement. We’ve got to make moves to get there, we know that. We’re constantly assessing that, and if there’s things this trade deadline that help us take steps up the mountain on that journey, we’ll absolutely do them. But if those things don’t present itself, then we’ll stay the course with what we have.”