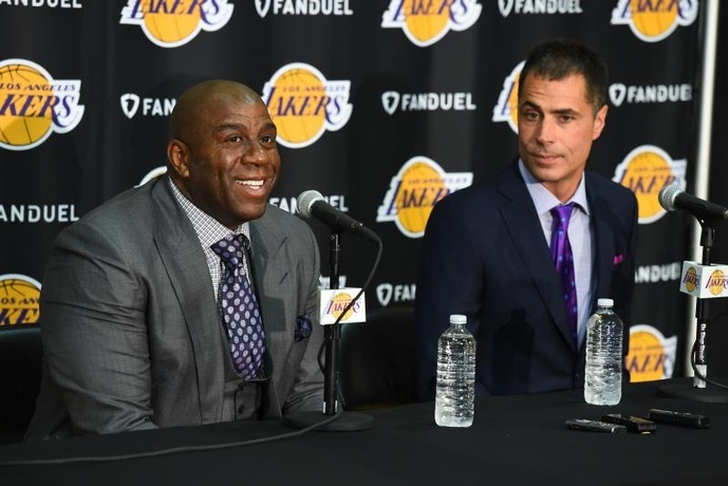 The Los Angeles Lakers are entering a crucial offseason for the franchise. Magic Johnson and Rob Pelinka have been targeting and promising big moves this offseason, and after five seasons without a playoff berth, the pressure in on the Lakers to start turning things around immediately. Here are three crucial moves the Lakers need to make this offseason if they're going to make the playoffs next year:

1) Land at least one superstar-level player

The Lakers haven't been shy about their plan to maximize their cap space this summer in order to ensure they can sign two All-Star level players to max contracts, with LeBron James and Paul George as their top two options. While this is still their preferred plan, there are a few snags that could stop them from accomplishing it.

First off, LeBron is likely only signing if there's another superstar involved and a number of other teams - namely the 76ers and Rockets - will be trying to lure him away from the Cavs as well. Secondly, George seems to like playing in Oklahoma City and him signing with LA is far from the foregone conclusion it once appeared to be. Finally, their best third option in DeMarcus Cousins ruptured his Achilles.

Can the Lakers still accomplish this goal? Absolutely. Their entire offseason will be based on their ability to fulfill this goal or not. While the Lakers can still re-sign Randle by clearing other cap space - which is highly unlikely - they only way they're going to really bring Randle back is if they don't land two star free agents. But, if they don't, re-signing Randle will then become their top priority. He had a breakout season this year and showed how valuable his versatility is. As one of the better young forwards in the league, Randle represents a very good Plan B for the Lakers - and one they can't afford to strike out on if they miss Plan A.

Being patient can be hard, especially in today's NBA climate. The Lakers will surely receive a sizable amount of criticism and ridicule should they not land a superstar free agent, but it's important that the front office doesn't panic. Los Angeles already has a quality core of young players and, with proper cap management, will still have enough cap space to go after two superstars again next summer - when players like Kawhi Leonard (who wants out of San Antonio), Klay Thompson (who Golden State won't be able to re-sign without Thompson taking a sizable discount), and Jimmy Butler will be free agents.

Keeping the long-term big picture in mind instead of making panicked short-term mistakes will be important should this offseason not go the way Los Angeles intended. Trust your young players and let them grow.