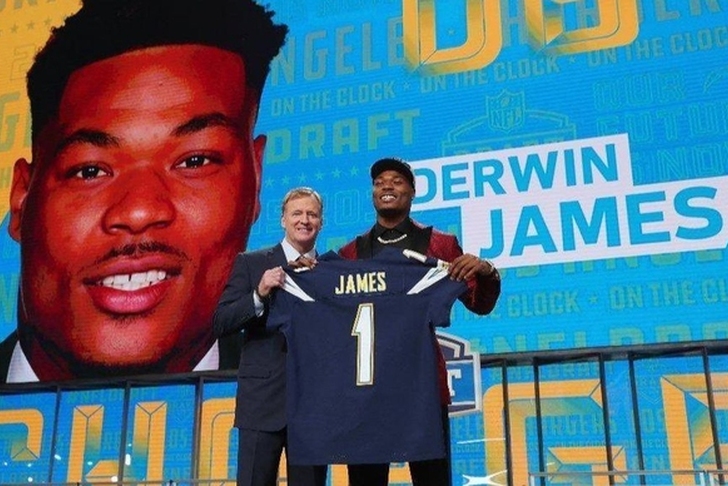 USA Today
Grade: B+
Breakdown:
"Getting S Derwin James at No. 17 was a steal. GM Tom Telesco never stopped infusing talent into an already formidable defense, thought it did need to get much better against the run. LB Uchenna Nwosu, DT Justin Jones and LB Kyzir White may collectively elevate the Bolts to Super Bowl dark horse. Telesco is clearly confident QB Philip Rivers, 36, isn't slowing down."

ESPN
Grade: B+
Breakdown:
"It was a quiet offseason for the Chargers, but they have a lot of talent on the roster. This is a team that could win the AFC West in 2018. L.A. got very little out of its 2017 rookie class, mostly due to injuries -- watch out for Mike Williams and Forrest Lamp in 2018. Now they have some possible gems in the 2018 class, too. Derwin James was the steal of Round 1 at 17 -- plug him in at one of the safety spots on Day 1. He's a bigger defender who's not afraid to hit and wrap up -- the Chargers gave up a league-worst 4.9 yards per rush last season and tackled terribly on the second level -- and he has the athleticism and range to cover the deep middle of the field.

Uchenna Nwosu (pick 48) is one of the best pure 3-4 edge rushers in this class. He's going to be good in a situational role with Joey Bosa and Melvin Ingram already on the roster. That wasn't a need position, but I like that the Chargers went with the best player on the board. Justin Jones at 84 was a reach for me -- I thought he was more of a fifth- or sixth-round pick -- but there weren't many nose tackles left, and the Chargers had to get one. I like safety Kyzir White (119) and receiver Dylan Cantrell (191) on Day 3. White, the younger brother of Bears' wideout Kevin White, is a physical player."

Bleacher Report
Grade: C
Breakdown:
"The unexpected slide of Florida State safety Derwin James gave the Los Angeles Chargers an easy decision in the first round. They continued to address defensive needs with edge-rusher Uchenna Nwosu and nose tackle Justin Jones. All three will play right away, with Nwosu and Jones being rotational pieces, but the latter two lack physical upside to be standout players.

The third day of the draft brought a mixed bag. Kyzir White is similar to currently rostered players in Jahleel Addae and Rayshawn Jenkins, as all are better moving downhill than in coverage. White and James will destroy receivers running mesh concepts, but there's not a clear pathway for White to play much.

Offensive depth pieces Scott Quessenberry, Dylan Cantrell and Justin Jackson face similar uphill battles to see much playing time. Jackson will fight for third on the depth chart, while Cantrell may not make the team and Quessenberry is a backup. It was a utilitarian-type class for the Chargers with few risks."

SB Nation
Grade: B+
Breakdown:
"The Chargers had a plan going into this draft, and it was to get more athletic and physical on defense. After using their first four picks on that side of the ball, it was mission accomplished for Los Angeles. It all started with Florida State safety Derwin James, a steal of a pick at No. 17 overall. He is going to be a superstar in the NFL.

With the 48th pick, they got USC pass rusher Uchenna Nwosu. He can be moved around but his best spot is playing off the edge. More than a safety and edge player, the Chargers needed a defensive lineman. They got one in the third round with Justin Jones of North Carolina State. He can play three-technique thanks to his ability to get up the field and create pressure. In the fourth round they got a thumper safety in Kyzir White of West Virginia. The Chargers finally addressed the offensive line in the fifth round with UCLA’s Scott Quesenberry. The line could have been addressed sooner in this draft. The Chargers also didn’t take a quarterback, so expect one early next year."

​Yahoo Sports
Grade: B
Breakdown:
"We might look back at safety Derwin James being the best value pick of the draft, at No. 17. He could have been a top-10 pick. The Chargers keep kicking the can down the road when it comes to finding Philip Rivers’ successor at quarterback but they got multiple players, even on the third day, who can contribute right away. Scott Quessenberry could develop into a starter someday and Justin Jackson might be a solid second running back. If athletic Uchenna Nwosu hits, adding to an already strong pass rush, this was a nice draft."

Sports Illustrated
Grade: B+
Breakdown:
"Los Angeles had a hole at free safety with Tre Boston not re-signed, and Derwin James, whom some have compared to Sean Taylor, is a great way to fill it. The question is whether James will be strictly a centerfielder in Gus Bradley’s defense, or if he’ll take over some of the box-safety responsibilities that hard-hitting Jahleel Addae has quietly handled with ease. That answer may ultimately come down to what is best for the Chargers’ run defense, which needed repair. Last season their nickel run D struggled to the point that edge stars Joey Bosa and Melvin Ingram had to take a more conservative pass-rushing approach, diminishing the defense’s greatest strength. GM Tom Telesco aimed to correct this with the second-round selection of linebacker Uchenna Nwosu and third-round pick of defensive tackle Justin Jones, who is here to replace an aging Brandon Mebane after this season. The only surprise in this draft came in the fourth round, when the Chargers went safety again, picking Kyzir White. With Addae and a lanky, overachieving backup like Adrian Phillips, that was not a position of need."