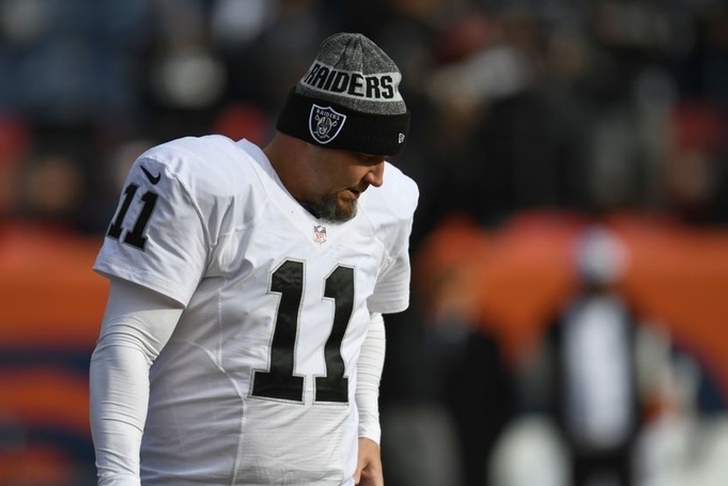 The Oakland Raiders head into the bye week with a disappointing 4-5 record, meaning that there's plenty to sort through during the team's open date. Here are all the latest news and rumors you need to know:

Sebastian Janikowski's Raiders career may be over
Oakland placed Janikowski on IR at the start of the season due to a back injury, and with Giorgio Tavecchio being successful as Janikowski's replacement, it's possible that the Raiders' all-time leading scorer won't play for the team again, according to Matt Scheidman of the San Jose Mercury News.

He’s the longest-tenured player in team history and Oakland’s all-time leading scorer by a mile. Yet after a back injury that has prohibited the lefty from kicking this season, his time as a Raider may be up.

Janikowski becomes an unrestricted free agent after this season, but how much incentive do the Raiders have to bring him back? They can designate him to return off injured reserve at any time this year, but Giorgio Tavecchio is getting the job done.

Before the season started, Janikowski agreed to take a $1 million pay cut following a contract dispute with the team. If he didn't agree to a pay cut, Oakland was considering releasing him.

Two players fined by NFL
Both defensive end Mario Edwards Jr. and safety Karl Joseph were fined by the NFL for their unnecessary roughness penalties against the Miami Dolphins.

Edwards was fined $9,115 for punching tight end Anthony Fasano in the head, while Joseph was fined $18,231 for his late hit on running back Damien Williams. Both incidents occured in the second quarter.

In Thursday’s Las Vegas Stadium Authority board meeting, Badain casually mentioned that there would be “an official groundbreaking” in his 90 seconds of remarks but didn’t mention publicly what time the event would be or who would be there.

It’s an invitation-only event that’s expected to start at 4 p.m.