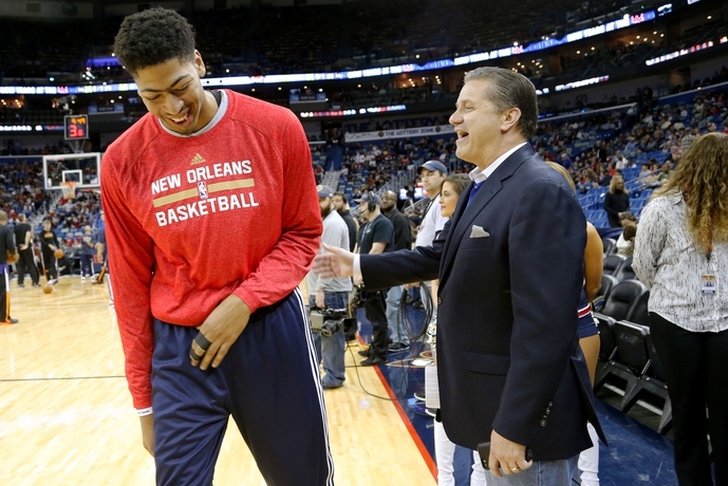 Kentucky basketball and John Calipari are synonymous with "one-and-done" and this current era of basketball. They had three more players taken in the first round of the NBA Draft last week, all of whom were picked in the lottery.

It was another banner night for Calipari, who continued his tradition of getting plenty of camera time, but all the enthusiasm was somewhat dampened by this new theory that Kentucky doesn't actually produce good NBA players.

It's a sentiment you have probably heard by now due to the campaigning of several media members, most adamantly by FS1's Colin Cowherd.

It's also something that is just flat out wrong - and the numbers prove it.

Since Calipari took over the Kentucky program prior to the 2009-2010 season, the Wildcats have produced 24 first-round picks and 31 picks in total, both of which are more than any other school.

Of course, sending players to the NBA nice, but it's what they do when they get there that matters. Kentucky aces that test, too.

In their rookie season, Kentucky players in the Calipari era have combined to average a higher player efficiency rating (PER) than players from all other colleges, and the disparity between Kentucky products and everyone else only gets larger as time goes on when you incorporate entire careers (to this point).

That's largely because Kentucky's hit rate on top prospects is higher than practically everyone else. Looking at other notable schools that have been home to several one-and-dones, like Duke and Kansas, it's not even a conversation.

The Blue Devils have had 15 first-round picks since 2010 (the most other than the Wildcats), and only Kyrie Irving has had any real success. Jabari Parker, Rodney Hood and Mason Plumlee are all very nice players, but there's also Eliot Williams, Nolan Smith, Austin Rivers and Jahlil Okafor. It certainly looks like Brandon Ingram and Jayson Tatum will be quality players, but it's still too early to tell.

Kansas has produced 10 first-round picks since 2010, four of whom have been one-and-dones. Joel Embiid looks like a star if he can stay healthy and Andrew Wiggins is certainly a quality player, but the Jayhawks are lacking depth outside of that. Remember Xavier Henry? What about Cole Aldrich? Thomas Robinson?

The point is this - every school is going to have busts or players that underproduce. It's the nature of the sport.

Yet, no other school has produced as many legitimate young stars as the Wildcats.

Now, about that lack of team and playoff success those UK detractors love to point to. If Anthony Davis, DeMarcus Cousins, Nerlens Noel, Devin Booker and Karl-Anthony Towns are so good, why do they have exactly zero playoff wins between them?

There's a simple answer for that. Because Kentucky produces top NBA talent, they usually go very early in the draft. Kentucky has had 11 players be drafted in the top 10 in the Calipari era, which is nearly 1.5 players per season - a lot more than every other school. And why do teams pick early in the draft? Because they're bad.

Many UK players, including the five listed above, were all picked to be franchise players. Considering how young a lot of these players still are, their respective teams are still building, and therefore don't have a lot of talent around them.

Should DeMarcus Cousins have made the playoffs by now? Judging by his talent, of course - but you can't kill the Kings organization for being a mess and blame the lack of success on Boogie at the same time.

Should Anthony Davis have made the playoffs more than once? Yes. But, in a loaded Western Conference, New Orleans has only been projected to make the postseason twice. He simply just hasn't had enough around him (until now with Cousins, of course).

There's also John Wall, who has led the Wizards to three conference semifinals appearances in the last four years, each time getting bounced by the top seed in the East. That's pretty successful, especially considering how low the overall talent level has been with that franchise.

So yes, while Kentucky has produced a number of players who haven't lived up to expectations, they've produced more current stars than anyone else. And, a number of those "underperforming" players are only classified that way because their young careers are still that - very, very young.

John Calipari's Kentucky has - despite yearly debates to the contrary - been good for college basketball, but there's no denying that the NBA has been its greatest beneficiary. Let's stop pretending otherwise.