Here Are 3 Players The Chiefs Could Cut This Offseason 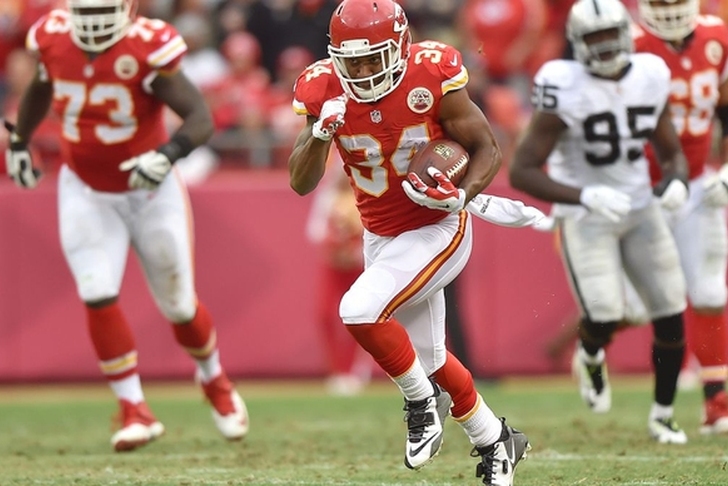 With the regular season over, the Kansas City Chiefs have turned their attention to the offseason. The team's first priority is re-signing its own players, and the Chiefs have numerous critical contributors they need to bring back next season. The team also a few that could end up being cap casualties, especially since cap space isn't unlimited.

The Chiefs have just over $31 million in cap space at the moment, so the team doesn't really need to clear cap space as much as other teams. However, Kansas City has several free agents the team wants to bring back and $31 million might not be enough to sign everyone. The team has only a few players whose contracts don't match their level of play and they are prime candidates to be released. With that in mind, here are three players the Chiefs could cut this offseason.

RB Knile Davis
Davis is the closest the Chiefs come to having a "name" player they could cut this offseason. Davis is now the No. 4 RB on the roster, getting outplayed (and outsnapped) by Jamaal Charles, Charcandrick West and Spencer Ware. That makes him expendable. The Chiefs would save $700,000 in salary cap space by cutting Davis. That's not a lot, but they don't need Davis. For more Chiefs coverage, download the Chat Sports Android and iPhone app.

OG Paul Fanaika
Fanaika signed with the Chiefs before last season, but never played due to injury. That allowed Jeff Allen to see the field and have a great season. Ben Grubbs is locked in as one starter and the Chiefs will try to bring back Allen, who is a free agent. If that happens, then the Chiefs won't need Fanaika. Cutting him would save the team nearly $1 million. That's not a ton, and the Chiefs could elect to keep him in case Allen leaves.

CB Marcus Cooper
Cooper was a seventh round pick by the 49ers in the 2013 draft. The Chiefs signed him before the start of that season. He didn't play much this season, and struggled when he did see the field. Cutting him would save the team $675,000. However, it's more likely Cooper gets a chance to earn a spot during the preseason.