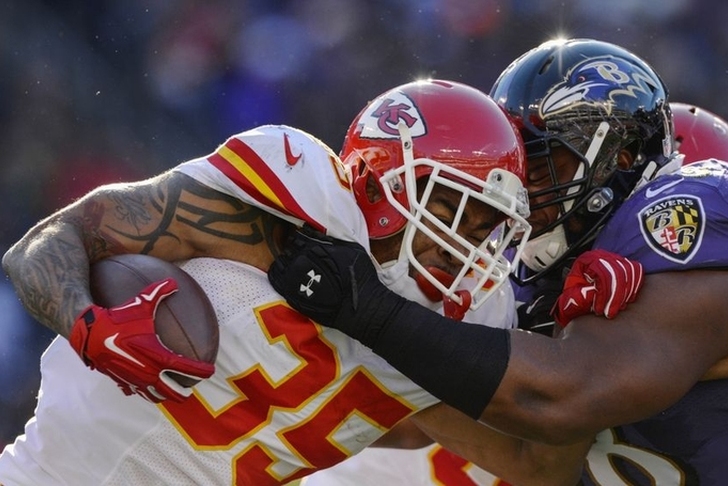 The Kansas City Chiefs' roll toward the playoffs continued on Sunday as they won their eighth straight game, upending the Baltimore Ravens 34-14. The Chiefs move to 9-5 and the Ravens fall to 4-10. Here's some notes, quotes and observations from the day in Maryland.

Kansas City was +3 in turnover margin, picking up two interceptions and a fumble. They also stopped a fake punt dead. Two of the turnovers directly ended in touchdowns -- a 73-yard Tyvon Branch fumble return and a 90-yard Marcus Peters INT run to the house.

This is the first time in the Baltimore Ravens' 20-year history that they've lost five games at home. They're 2-5 in Baltimore and have lost three straight overall.

Alex Smith played his game manager role to perfection on Sunday. He threw for just 171 yards, but completed 86% of his passes and did a fantastic job of extending drives and limiting Baltimore's chances at rebuttals.

Baltimore WR Kamar Aiken had a banner day, catching eight balls for 128 yards. One of those was a Hail Mary TD connection with Jimmy Clausen with time expiring in the first half.

"To have the three turnovers -- and technically, almost a fourth with when they went for the fake -- to be able to capitalize on those, it changed that game." -- Chiefs QB Alex Smith

"For us, the story of the game, basically, is turnovers." -- Ravens HC John Harbaugh

"They've kind of got that mojo. The defense, you see them kind of salivate, so to speak." -- Alex Smith

"The biggest thing is taking care of the ball. Whether it's the fumble, or the two interceptions that I had, you're not going to win games turning the ball over." -- Ravens QB Jimmy Clausen

The Kansas City Chiefs have gone from dead in the water at 1-5 to the most dangerous team in the NFL that no one is talking about. Kansas City is the first team in NFL history to follow a five-game losing streak with eight wins in a row in the same season. All facets of the Chiefs' game have been clicking, and they're pouncing on almost every miscue opposing teams make. The Chiefs took advantage of a failed fake punt, costly penalties and a couple of turnovers to outdistance the Ravens and once again prove their status as a legit Super Bowl contender.

Gold pants can't mask the reality of the Ravens' situation -- this season is lost, completely and utterly lost. QB Jimmy Clausen was ok under center, but he still made costly mistakes and the running game didn't do anything to pick him up. The defense just couldn't hang with the offense's mistakes, bending and breaking under the weight put on them. These next two games can't end fast enough for Baltimore.