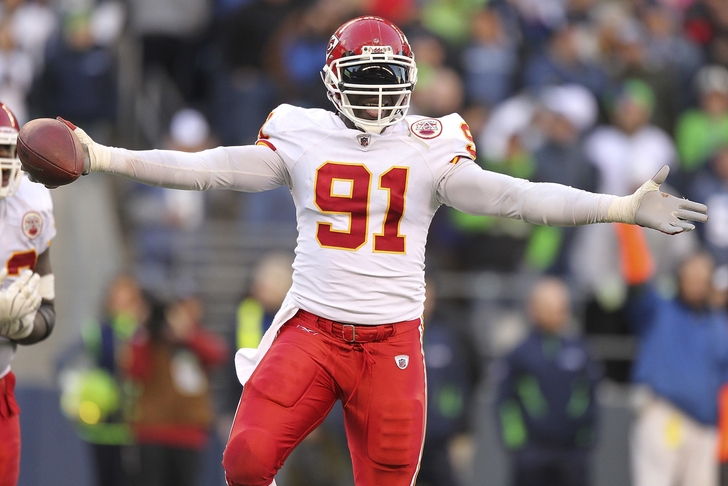 The KC Chiefs went into the 2014 NFL free agency period at a disadvantage, working with limited salary cap space to attempt to both retain key free agents and to delve into the open market.

From the looks of it, 2015 won't be any sort of reprieve either.

According to Adam Teicher, KC Chiefs NFL Nation writer for ESPN.com, the KC Chiefs "have about $125.5 million of salary cap commitments for their 39 players under contract for 2015."

Excluding eventual cuts, and taking into account the projected salary cap rise from $133 million in 2014 to approximately $140 million in 2015, the KC Chiefs' current contract breakdown would leave just $14.5 million to play with in order to field a full 53-man roster.

Yet as Adam Teicher explains, that's just the first problem of three facing the KC Chiefs' books come the 2015 NFL free agency period --"Second, quarterback Alex Smith and linebacker Justin Houston are scheduled to become unrestricted free agents in 2015 and the Chiefs will need significant salary cap room in order to sign them. Last, this 2015 total doesn't include so-called dead money for players they release this year who won't be with them next year."

Those looking at wide receiver Dwayne Bowe and his inflated $14 million cap number for 2015 as a potential cut should be forewarned -- the veteran wideout would still cost the KC Chiefs $10.5 million against the 2015 salary cap if released prior to the 2015 NFL season.

Teicher's big-money options for the KC Chiefs to consider on the cut line next offseason include both linebacker Tamba Hali (cap savings: $9 million) and cornerback Brandon Flowers ($7 million).