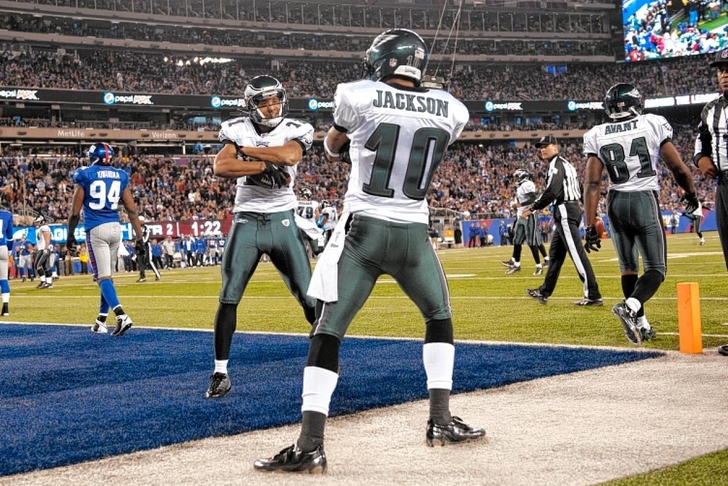 Fans of the KC Chiefs have been clamoring for the Chiefs to sign a legitimate number-two wide receiver to line up across from Dwayne Bowe with the 2014 NFL season begins.

Now it looks like the KC Chiefs are looking to upgrade those expections by having two number-one receivers for starting quarterback Alex Smith to choose from.

According to Terez Paylor of the Kansas City Star, the KC Chiefs are one of several teams in the mix for the services of former Philadelphia Eagles wide receiver DeSean Jackson --

Can confirm reports DeSean Jackson will visit Washington on Monday. Source tells me the #Chiefs are among 7-8 teams vying for his services.

While the KC Chiefs may not have substantial cap space (around $4.66 million as of this writing), creative financial work and DeSean Jackson's preexisting relationship with former Philadelphia Eagles and current KC Chiefs head coach Andy Reid could be enough to sway the 27-year-old wideout into looking at the Chiefs as a viable option.

Jackson is scheduled to meet with the Redskins first, but it would seem that the three-time NFL Pro Bowler and his representation will be in no hurry to find a perfect fit. Jackson has spent his entire six-year NFL career with the Philadelphia Eagles so far, and will probably be reticent to quickly jump into another situation without surveying all of his options.

The potential KC Chiefs target had a career year in 2013, before being released by the Philadelphia Eagles for both financial reasons and perceived personal issues. He set career benchmarks in both receiving yards (1,332) and receiving yards per game (83.3), along with tying a career-high set in 2009 with nine receiving touchdowns.