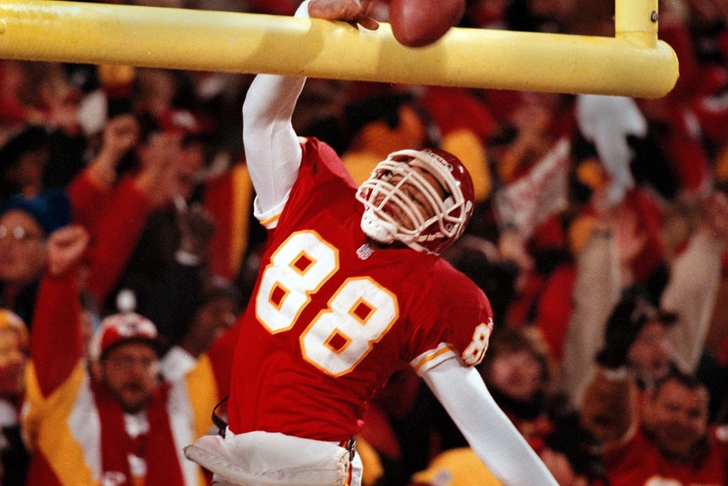 The Kansas City Chiefs are the NFL's last remaining undefeated team, but word out of KC strongly suggests the Chiefs are looking at ways to strengthen their offense for their inevitable playoff run.

One name that was floated earlier this year is re-emerging as a possible trade option - Atlanta Falcons TE Tony Gonzalez. Gonzalez spent the first 12 years of his career in Kansas City, and the idea of bringing Gonzalez home is said to be incredibly tempting for a Chiefs front office that was never able to build a contender in Gonzalez's first stint with the team.

Now that Kansas City is a legitimate force in the AFC West, the timing would be perfect for an emotional reunion - Gonzalez, at 37, doesn't have a whole lot left in the tank, and with the 2-5 Falcons starting to look ahead to the draft, this might be the last chance Gonzalez has to add a ring to his glowing NFL resume.

It's still unclear how much the Falcons would want in return for Gonzalez, but a tanking team probably wouldn't ask for much in return for a 37-year-old player, no matter how much he can still bring to the table. The Chiefs have plenty of picks they could part with for Gonzalez, and the only real roadblock would be Atlanta deciding to play hardball. We have a much better read on Kansas City's goals than Atlanta's, and while it's clear that the Chiefs want to make this happen, Atlanta may try to use that to squeeze more out of them than they'd be willing to spend otherwise.

The Chiefs are actively pursuing a trade that would bring Gonzalez "home" to Kansas City. The Falcons are playing this one close to the chest, and if they're willing to part with the player, they haven't indicated that publicly or privately. This one could go down to the wire, but we think this might be the most likely trade out of anything that's been discussed in the days leading up to the deadline.

Stay tuned to Chat Sports for all the latest Chiefs news and rumors from all your favorite blogs, papers, and national news outlets