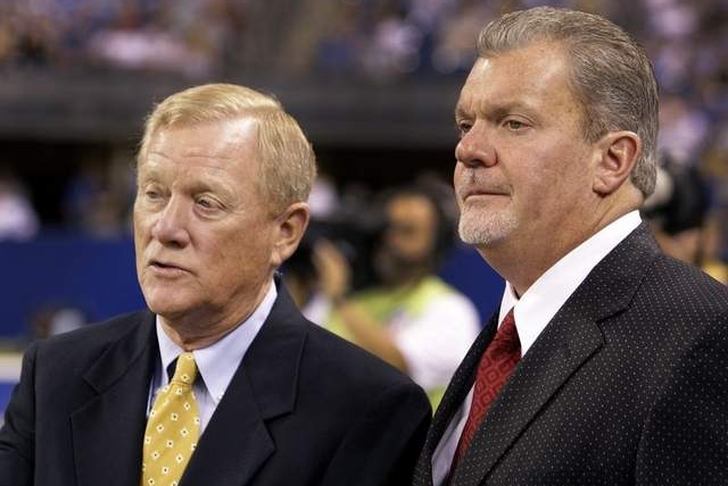 Some people are looking at Indianapolis and are in disbelief this is the same team.  The Colts making some decent-sized moves in free agency?  Are we sure this is Bill Polian's team?  Break out the applause though folks because while these weren't the biggest names in the market, they are moves that are helping Indy improve in many areas.

The team has addressed the hole left by linebacker Clint Session.  Ernie Sims, a former Eagle, has the make-up of a Colts LB and will fit in nicely.  He is undersized but very intuitive and quick.  Sims never became the playmaker the Eagles had envisioned when drafting him but the Colts defense is made up of mostly underrated guys who are best known as part of a whole in Indy's D, not as an individual.  Sims fits this mold and should work well in the Cover 2 scheme.

Defensive end Jamaal Anderson is part of the piece I have been asking the Colts about for many years now.  Tighten up the run defense by getting stronger up the middle.  Technically, Anderson is a DE, but many speculate he will be used in the Colts rotation of DTs.  I still feel uneasy about this large rotation but if you add Anderson (and Tommy Harris, to be mentioned shortly), you are providing good depth and a variety of different players.  Anderson comes in almost as a hybrid.  It would be ideal for him to play tackle on third downs to add pass rush up the middle.  On first and second, he can help spell Mathis or Freeney and be more of a run defender.  He is the opposite of Jerry Hughes, who is a pure pass rusher.  Anderson gives nice balance overall throughout the defensive line.

Tommie Harris is a bigger name most have heard of, but one that was not being talked about too much during free agency.  Just when the Patriots finally reach out, the Colts come in and make an offer.  Harris once shined with Chicago and Indy is hoping to rekindle some of that magic he once had.  This is the piece people have really been waiting for.  Harris is a true run stuffer and very familiar with the Cover 2 scheme.  Now the rotation is five men strong and each individual brings a little something different to the defense.

Fili Moala and Antonio Johnson are more of your every- down tackles who aren't suited for one particular situation but have high motors and are very dependable.  Nevis is of course a rookie and will benefit from the signings of veterans Anderson and Harris.  Expect him to be the fifth man in the rotation and not garnish a whole lot of playing time this year.  Harris is your classic run stopper and could at least fight for a starting spot.  If not, expect him to be the first guy off the bench and be used often against run-heavy teams.

Yes, I have gone on record and said I really don't believe in this rotation of defensive tackles.  But, I also said this is the year the Colts need to make a bigger splash in free agency than they have in the past and that has come true.  The rotation will be bulked up now and the addition of Sims at linebacker is an obvious and smart choice.  If Indy makes anymore moves in the market, it would come as a major shock indeed since they have seemingly went above and beyond their usual yearly quota.  Still, Hayden's cornerback position is something that may need to be addressed and there is whispers going around about Reggie Wayne's age.  Can he continue to play at a high level or do the Colts need to start looking at getting his protégé?  Free agency is coming to a close, so keep checking back for the final moves in the market.