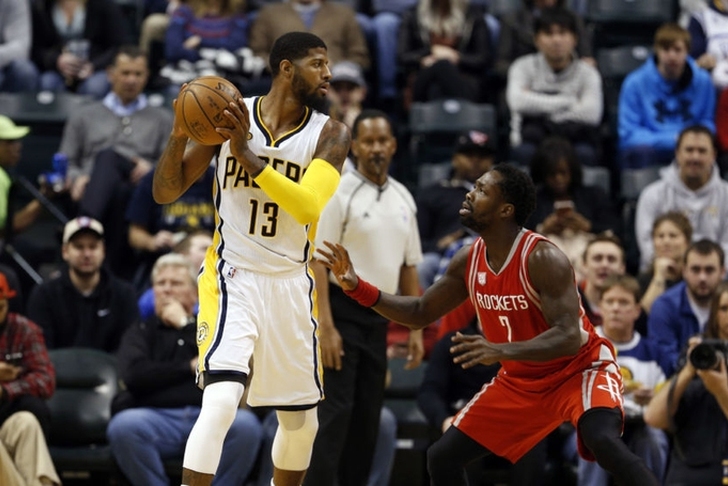 The Houston Rockets finished third in the Western Conference last year, but general manager Daryl Morey has made it clear he's not satisfied. If the Rockets are going to make a run at taking down the Warriors, they'll need to pull off a trade or two. That could be to clear cap space for free agency or land a superstar.

Here are three trades the Rockets could make before or during NBA Free Agency:

1. Trade Patrick Beverley To The Jazz
The Beverley to the Jazz rumors have floated around since the draft and they make sense. The Jazz are preparing to lose George Hill this offseason, meaning they'd need more point guard help. Beverley could be a good fit in Utah and his defense surely appeals to the Jazz. Of course, the Jazz likely won't make any moves until Gordon Hayward makes his decision. What Hayward decides will affect everything the Jazz do for the next few years.

2. Trade For Paul George
The Rockets have interest in landing George and believe they could convince him to stay in the long-term. But do the Rockets actually have the pieces to pull off a trade? Houston doesn't have many promising young players, especially since the Pacers don't have much interest in Clint Capela (Myles Turner is a better young center). A package centered on older players like Beverley, late first round picks and young guys like Sam Dekker and Montrezl Harrell isn't going to be enough for the Pacers. Especially since the Celtics can blow away any offer the Rockets try to make. The Rockets have a chance here, but it's a slim one.

3. Trade Lou Williams (Or Ryan Anderson)
If the Rockets are serious about landing a max player like Chris Paul, they'll need to clear more cap space. The two obvious options are Lou Williams and Ryan Anderson. Williams is the easier of the two to trade, because of his contract. Williams has one year left on his deal and he'll make $7 million. Meanwhile, Anderson is one year into a four-year, $80 million deal. Williams, a sixth man of the year finalist, can provide a spark off the bench for a team that needs help. The Washington Wizards certainly need the bench help, although they might not be the best trade partner for Houston. Still, if the Rockets end up getting a verbal pledged from someone like Paul, they can find a taker for Williams.

Follow our Houston Rockets team page for all the latest Rockets Rumors or download the Chat Sports App!