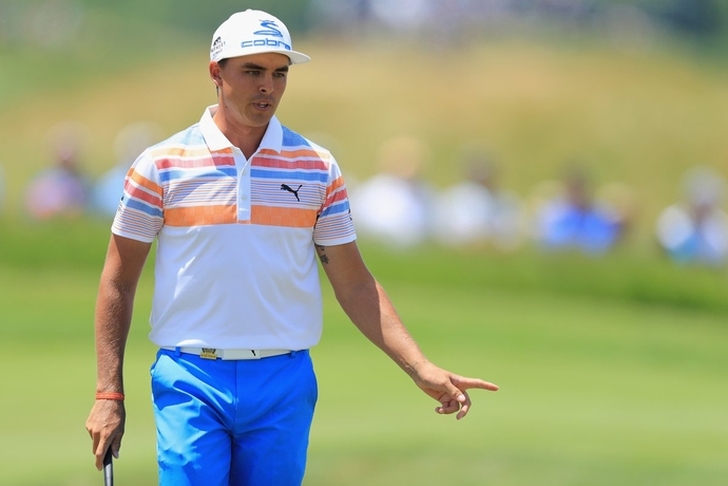 The first round of the 2017 U.S. Open is in the books and Rickie Fowler leads after a nearly perfect round. Fowler didn't have too much trouble at Erin Hills, with seven birdies and no bogeys as he posted a 7-under 65. Not only is it the best opening round of Fowler's U.S. Open career, it matches the best first round in U.S. Open history. Of course, the question now becomes if Fowler can avoid the pitfalls he's faced in previous majors and hold off the rest of the field.

Check out the leaderboard, who surprised, highlights and more from the first round of the 2017 U.S. Open below.

There's the top 10 (and change) and there's a common theme: no majors. Rickie Fowler and Paul Casey have been close, but many casual fans won't recognize a good chunk of those names. A few are bound to fall down the leaderboard tomorrow, but it's fascinating to see the unheralded players thrive. This is shaping up to be a major in which a first-time winner takes home the trophy.

Blimp Goes Down
This was one of the main stories from the morning. A blimp caught fire at the U.S. Open and went down in an open field. Some videos are below.

Pretty sure I just watched the blimp crash at the #USOPEN! Hope everybody is ok! pic.twitter.com/OSOCSBF46p

Just got to the #USOpen and the blimp caught fire and crashed. People parachuted out. pic.twitter.com/1lDi3VkXCu

The pilot was seriously burned, but is reportedly okay. The USGA said the blimp was affiliated with FOX or the USGA.

In fact, only Sergio Garcia (No. 7) is under par, at -1. And this all comes on a day in which a new record was set for most players under par after the first round of the U.S. Open. Go figure.

Amateurs Thriving
On the flip side, the amateurs are actually outplaying the top players. Scottie Scheffler finished -3 and is in the Top 15, while Cameron Champ finished at -2. Maverick McNealy (great name) and Mason Anderson are both +1. That's not every amateur, but several put together great first rounds on the longest course in U.S. Open history.

Throw it in long and let it spin back.

Hideki Matsuyama with the touch from the fairway on the par-4 15th. #USOpen https://t.co/RPZIf0MNV6

The live stream of the U.S. Open starts at 11 a.m. ET tomorrow, on FoxSportsGo, while FS1 starts the TV coverage before Fox takes over later in the day. It's cut day, and several big names will just be looking to survive and advance to the weekend.