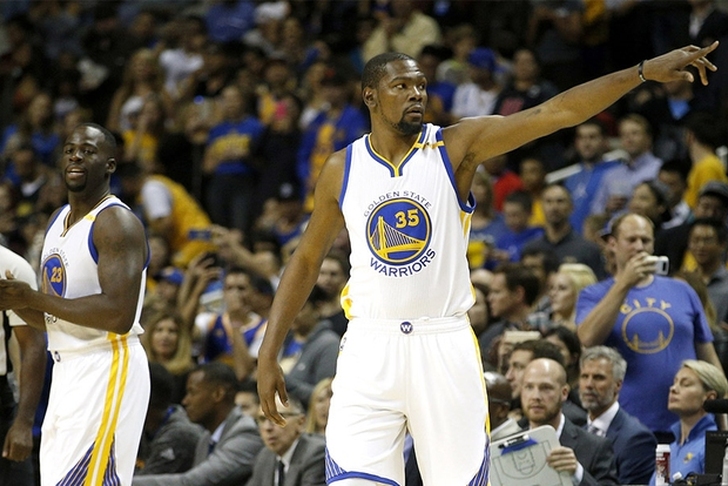 Durant has indeed re-signed for less money. More on his new contract here.

The plan for Kevin Durant was to take slightly less money this offseason so that the Golden State Warriors could re-sign Andre Igudoala. Now that both Iguodala and Shaun Livingston are back with Golden State, Durant could take even less money than previously expected.

"Durant, according to multiple sources, is not just passing on the new maximum contract he could get, which would start at $34.65 million. His plan is to also [not] take entire raise he is eligible for, which would start his salary at $31.6 million," Marcus Thompson of the San Jose Mercury News reports. "Could he go as low as $28 million? Or $25 million?

"The exact figure is being worked out now, but Durant’s willingness to take even less than his expected 20 percent bump is how the Warriors were able to sign Andre Iguodala for $48 million and Shaun Livingston for $24 million, both over three years."

If Durant does lower his price by that much, it saves the Warriors a significant amount of money on the luxury tax. The Warriors gave Stephen Curry a five-year, $201 million supermax contract this offseason, which will help bring the Warriors deep into the tax. That tax bill will only continue go up the longer the Warriors are over the limit and as new contracts are needed for key players like Durant, Klay Thompson and Draymond Green.

It's a selfless move by Durant to help the Warriors keep key players in Livingston and Iguodala, while keeping the Warriors in a slightly better financial position.