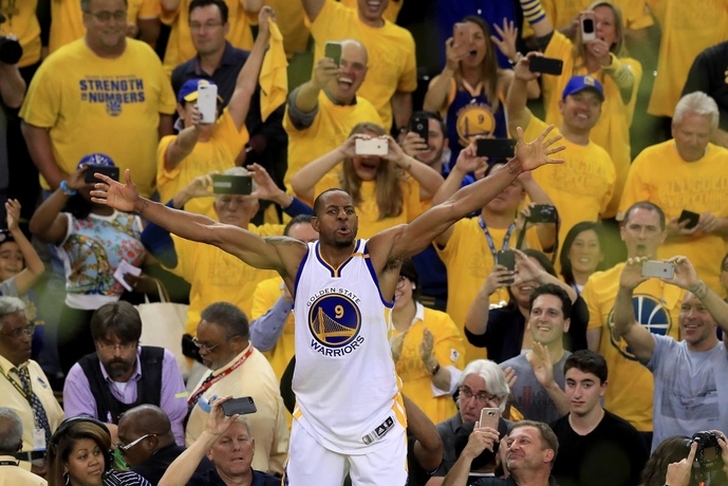 The Golden State Warriors will keep their big four this offseason, but they might lose a different top player. Andre Iguodala will reportedly give serious consideration to leaving the Warriors in free agency and signing a big contract elsewhere.

"Iguodala plans to seriously consider other teams in July, league sources told The Vertical," Shams Charania writes. "Prospective teams would need to show in meetings a vision to move toward contention to pry Iguodala from Golden State, league sources said."

Charania writes that several teams will attempt to land Iguodala this offseason, including the Bulls, Clippers, Hawks Jazz and Timberwolves. Charania also reports that Iguodala's deal could reach $20 million per years.

Earlier this month, it was reported that Kevin Durant was open to taking less money to help keep the Warriors core together. Taking a few million less this offseason would allow the Warriors to use their bird rights to go over the cap limit to re-sign someone like Andre Iguodala. But if his next contract does reach $20 million per year, that might be too much for the Warriors to spend. At age 33, this is likely Iguodala's last chance to get a sizeable contract in free agency.

The Warriors could have interest in adding Vince Carter this offseason and he could help replace Iguodala's minutes. Rookie Patrick McCaw would be in line for more minutes, even if he's not the full-fledged replacement.

The main loss for the Warriors would be in their "death lineup," which consists of Iguodala, Durant, Klay Thompson, Stephen Curry and Draymond Green. If Iguodala walks, it's not clear who would take his place.